Batch Analysis of Tryptophan and Its Metabolites

The batch analysis of metabolites in biosamples by HPLC normally requires several tens of minutes. However, high-speed, high-separation HPLC using ultrafine particle packing that is recently becoming widespread can reduce the analysis time by at least one-fifth.
The batch analysis of metabolites with a Prominence UFLC ultrafast liquid chromatograph system using tryptophan is described below.

Tryptophan is known to have two metabolic pathways, kynurenine and serotonin. Tryptophan and 16 major metabolic components, including kynurenine and serotonin, were batch analyzed using a Shim-pack XR-ODS high-speed, high-separation column. Batch analysis of the components could be completed in approximately six minutes under these analytical conditions. The column pressure for this analysis was approximately 25 MPa.

A photodiode array detector and spectrofluorometric detector were connected in series for this analysis. The natural fluorescence of compounds with an indole skeleton permits detection with higher sensitivity and selectivity. 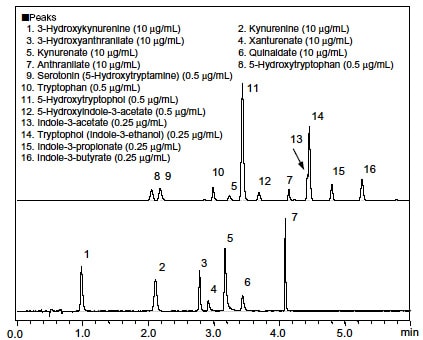