In the biopharmaceutical development of an antibody, it is known that heterogeneity may sometimes occur in the N-terminal or C-terminus of a protein. For example, there are cases where the terminal amino acid has been eliminated or modified, so it is very important to grasp such a change in structure to maintain the quality of biopharmaceuticals. Typically, when determining the amino acid sequence of a protein, a protein sequencer that utilizes the reliable Edman degradation method is used to determine the N-terminal amino acids one by one.
If the N-terminal amino group (α-amino group) has been modified, the de-blocking method is typically used to enable the use of the protein sequencer. But sometimes this de-blocking is not successful due to the existence of several types of modifications and the difficulty of optimizing the reaction conditions.
Therefore, sequence analysis by mass spectrometry is sometimes required as an alternative. Because some amino acids have a similar or even exactly the same mass, a mass spectrometer capable of very high- resolution MS/MS is required.
Here, we introduce an example of N-terminal amino acid sequence analysis of antibody molecules using the Shimadzu MALDI-7090 high-resolution MALDI-TOF MS.

The monoclonal antibody selected as the analytical sample was first subjected to SDS-PAGE to separate the antibody into heavy chains and light chains. Preparation of the N-terminal peptide was conducted according to the method described by Yamaguchi et al.1) The protocol is as follows: The respective heavy chains and light chains gel pieces were subjected to reduction and alkylation, the lysine residue was subjected to guanidination, and N-terminal amino group derivatization was performed using sulfo-n- hydroxysuccinimidobiotin. After that, in-gel digestion was conducted using trypsin, the digest fragments were subjected to performic acid oxidation, and DITC resin was added to the fragment cleaved from the N-terminal derivatized S-S bond. Thus, the digested fragments (protein internal sequence fragments) with an exposed α-amino group are adsorbed to the DITC resin while the sulfonic acid derivatized N-terminal peptides obtained by the process described above and the N-terminal peptides with blocked termini are permitted to remain in solution. This solution was collected and subjected to MS/MS analysis using the MALDI-7090.

When the respective antibody heavy and light chains were submitted to MS analysis, the N-terminal peptides were detected at m/z 2044.10 and 1850.09 respectively (Fig. 1). 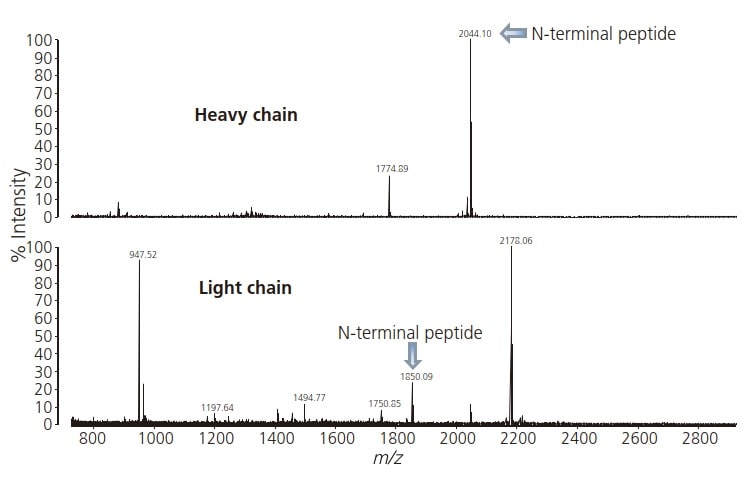