MS/MS was performed using the [M+Na＋(m/z557.6) molecular ion peak as the precursor ion. In addition to peaks derived from cleavage of the peptide bond and glycosidic bond, a peak assumed to be the O,2A5 ion was observed atm/z1156.4. An A-type fragmentation is called a cross-ring cleavage, and is frequently seen in the mass spectrometry of sugar chains. 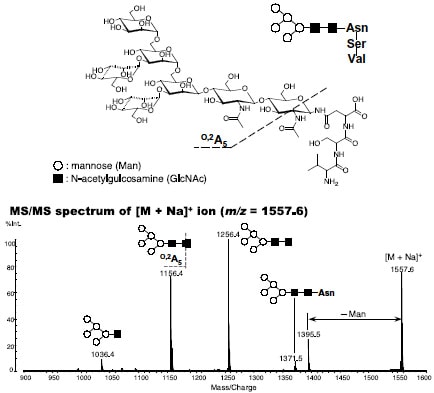 The laser ionization quadrupole ion-trap time-of-flight mass spectrometer permits MSn analysis. Sugar chain sequence information can be obtained using MS/MS, MS/MS/MS (MS3), or above. Moreover, the fragment information obtained from MS3 can be used to confirm if the MS/MS product ions (precursor ions for MS3) have been correctly assigned.
As an example, the MS3 spectra are shown usingm/z1156.4 andm/z1036.4 observed in MS/MS as the precursor ions. The M-60 (C2H4O2) fragment specific to the 0,2A ion was observed in the MS3 spectrum form/z1156.4.
The MS3 spectrum form/z1036.4 exhibits 3,5A type cross-ring cleavage fragment ions, in addition to fragments from the glycosidic bond cleavages, such as the B3 and C3 ions.
In the M5GP structural formula below, the precursor ions (O,2A5 and B4) in the MS3 spectrum are denoted by broken lines and the product ions are denoted as dotted lines. 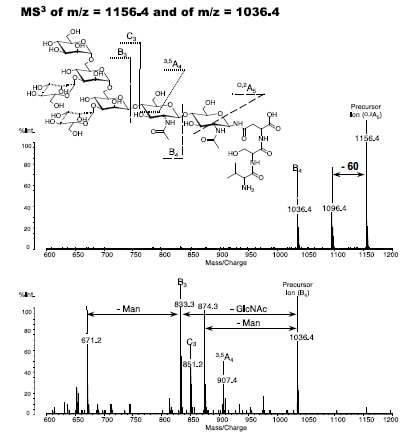