MALDI-TOF mass spectrometers are a mass spectrometer type that is used in a wide range of fields likewise LCMS, in terms of high through-put and high sensitivity. These instruments have recently being utilized more and more for simple molecular weight measurement and profiling of synthesized products and high-molecular compounds. This is because instruments of this type have several advantageous features: singly-charged ions are generated so molecular weights can be recognized easily, the mass range is wide, and there are many solvent options because the sample is dried before measurement.
On the other hand, due to changes in social conditions in these several years, government offices, universities, and private enterprises strongly request the reduction of costs for both introduction and running of instruments used for such applications. The benchtop "MALDI-8020" MALDI- TOF mass spectrometer is a new instrument that can sufficiently meet such market needs. The noteworthy point of this instrument is that it has a shorter flight tube, which is the key feature of its small size, while retaining the performance equal to or higher than that of a conventional model.
Development of instruments in recent years is moving toward higher specifications. In the case of MALDI-TOF mass spectrometers, reflectron mode has attracted attention because of its high resolving power and structure analysis function by MS/MS. The usability of linear mode, on the other hand, has been known for a long time; however, there have been no major technical progressions in linear mode recently. The linear mode is, for example, effective in detecting phosphorylation that is a typical post-translational modification of proteins, and in confirming molecular weights of unstable compounds. This article introduces an example of measuring digests of phosphoprotein and analyzing phosphate modifications using the benchtop MALDI-TOF mass spectrometer "MALDI-8020".

The linear mode is effective in measuring high molecular weight compounds and compounds having unstable functional groups. Ionized compounds may be decayed due to their excess internal energy within the free flight space by the MALDI method. Since the velocities of fragment ions generated in this process are the same as that of the original compound, they are recognized as the same molecular weight in the linear mode. On the other hand, in the reflectron mode, such fragments are kinetic- energy dependently separated into masses, which are observed as individual masses. Therefore, mass resolving power and accuracy can be obtained in reflectron mode but there are also disadvantages: when functional groups are desorbed from components, their signals may become too strong, or in an extreme case, molecular ions may not be detected at all.
As shown in Fig. 1 of phosphorylated peptides may fragment easily during the flight. For such compounds, linear mode is suitable for measurement. 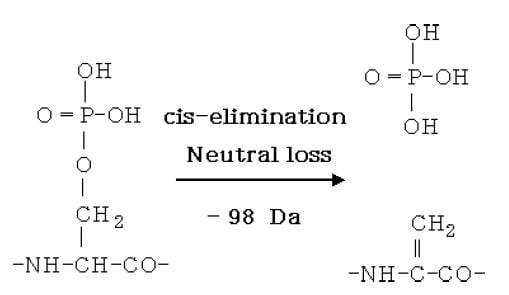