■ Selecting the Ideal Measurement Mode and Matrix for Phosphopeptide Detection

Phosphorylation is one type of post-translational modification of proteins. It plays an important function in organisms.
The analysis of phosphopeptides using MALDI detection is introduced below.
To achieve higher resolution and accuracy, the reflectron mode is used for normal peptide measurements. However in this mode, signals from the target phosphopeptides are difficult to detect due to the so-called neutral loss phenomenon, whereby the phosphate group is dissociated from the phosphopeptide. Therefore, such unstable compounds are first measured in the linear mode.

As shown in Fig. 1, only the signal corresponding to the phosphopeptide is observed in the linear mode. By using DHB as the matrix, a spectrum can also be obtained in the reflectron mode with the neutral loss comparatively suppressed.
Conversely, neutral loss can also be used to evaluate the absence or presence of phosphorylation. If neutral loss is discovered in comparisons between the reflectron mode and linear mode and between DHB and CHCA, there is a high probability that the peptide is phosphorylated. 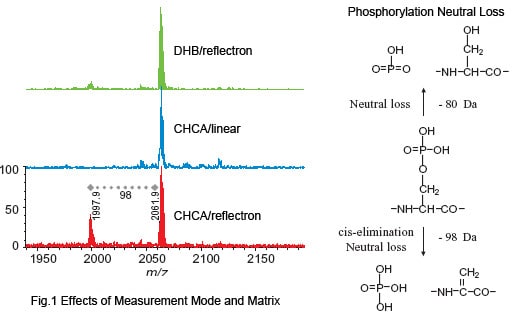 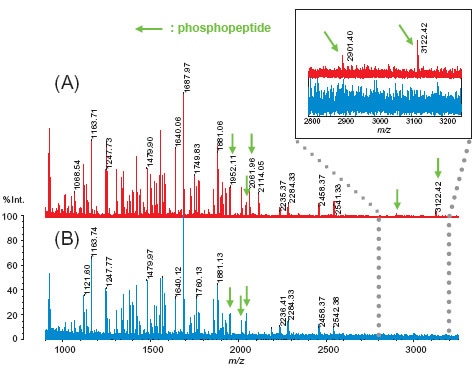 Consequently, changing the measurement mode or matrix composition enhances the detection sensitivity for phosphopeptides in the sample mixture. Such basic steps are used for structural analysis such as MS/MS.

The AXIMA Performance is one of the most powerful tools in mass spectrometry, delivering information-rich spectra with greater sensitivity and higher confidence in identification. It is an extremely versatile and powerful TOF-TOF system, integrating workflows for a diverse range of analytical needs.