The importance of protein post-translational modification analysis has heightened in recent years. The type of modification can be predicted to some degree from the amino acid sequence, but in practice testing is required for proof.
An easy modification analysis method using Transdirect insect cell (Cell-Free Protein Synthesis Kit) in combination with a MALDI-TOF mass spectrometer is introduced below.

N-myristoylation analysis : Protein N-myristoylation refers to the modification reaction that transfers myristate, a 14-carbon saturated fatty acid, to the glycine reside of the newly exposed N-terminal following removal of the initiator methionine. This modification has been recognized in many proteins involved in cell information transmission. It is known to play an extremely important role in binding to membranes and in protein-protein interactions. We analyzed tGelsolin in which N-myristoylation is known to occur as the model protein. 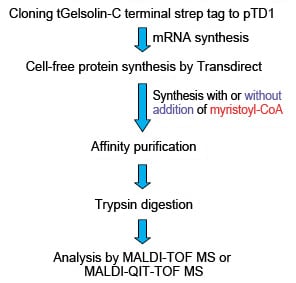 ■ Results
The addition of myristoyl-CoA as a substrate for the modification reaction resulted in the detection of the m/z 1926.2 peptide fragment thought to result from N-myristoylation (Fig. 1). MS/MS analysis identified this peak as an N-terminal peptide fragment containing the myristoyl group (Fig. 2).
The same method can be applied to analyze N-acetylation and initiator methionine removal. 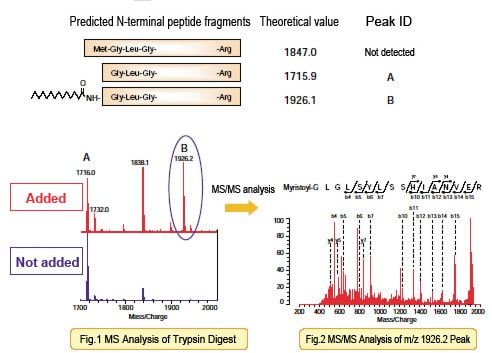 The results above show that Transdirect has the ability to cause the typical protein modifications occurring at the N-terminal. In combination with a mass spectrometer, it can be seen that this method provides a powerful tool for N-terminal modification analysis.

* These are the results of joint research conducted with Prof. Toshihiko Utsumi, Yamaguchi University Graduate School of Medicine.