The importance of protein post-translational modification analysis has heightened in recent years.
Protein prenylation is a C-terminal lipid modification, many of which have been recognized in low-molecular-weight GTP-binding proteins such as Ras. It is known to play an important role in protein-membrane and protein-protein interactions
An effective analysis method for protein prenylation using a combination of the Transdirect insect cell cell-free protein synthesis kit and MALDI-TOF mass spectrometer is introduced below. 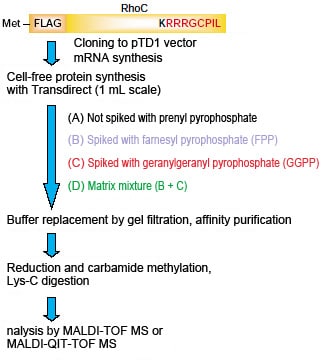 The results above show that Transdirect retains prenyltransferase that offers the activity required for protein prenylation. In combination with a mass spectrometer, it can be seen that this method provides a powerful tool for prenylation analysis.