Artificial photosynthesis is a technique to capture energy from the sun and store it chemically. It is expected to become the 4th renewable energy source along with photovoltaic, solar thermal, and biomass. Shown below is a result of simultaneous analysis of CO and H2, which are generated in a photochemical-carbon dioxide reduction reaction. 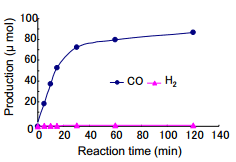 Fig. 1 shows a chromatogram of substances generated in a photochemical carbon dioxide reduction. Fig. 2. shows a graph of CO and H2 production plotted against reaction time. It was confirmed that CO production increased sharply for the first 30 minutes of reaction time, after which it shifted to a more gradual increase. The BID detector in the Tracera system can provide simultaneous high-sensitivity measurements of CO and H2. This detector can detect all components eluted from the column, thus enabling acquisition of a variety of information as well as the target component measurements.

The new Tracera GC System is now ready to solve your trace analysis needs. This system utilizes the new Barrier Discharge Ionization Detector technology coupled with a GC-2010 Plus capillary gas chromatograph to create a GC system that makes it possible to reveal trace components that are difficult to see by other GC detectors.