The photoreaction quantum yield is one performance indicator for photochemical reactions or photocatalysts. It is the ratio between the number of reaction product molecules from a photochemical reaction (or alternatively the reduction in number of molecules in the substrate) and the number of photons absorbed.
Conventionally, chemical actinometers based on substances with known quantum yield, such as iron oxalate, were used. However, this method requires performing experiments for long periods in a dark room by skilled personnel and also requires repeating the experiments if irradiation parameters are changed. It also has other problems, such as not being able to compensate for changes in light absorption by samples due to reactions.
Therefore, we developed the QYM-01 photoreaction quantum yield evaluation system which permits accurate and easy quantitation measurements of absorbed photons in conjunction with Professor Osamu Ishitani, Graduate School of Science and Engineering, Tokyo Institute of Technology. In this example, we confirmed how results from the new system correlate with the conventional method.


This instrument is not available in Europe and may not be available in some other countries. Please contact your local Shimadzu representative for availability. 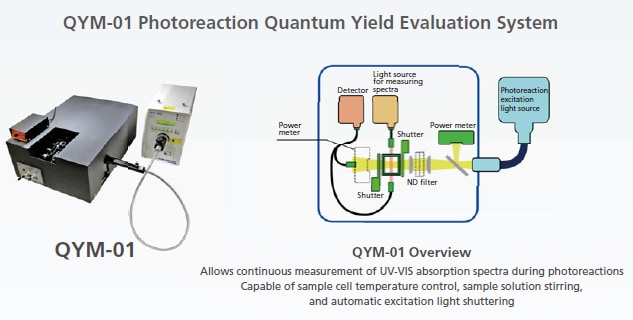 The QYM-01 was verified by comparing measurements of the absorbed light intensity by the QYM-01 and a chemical actinometer. The QYM-01 was used to irradiate an aqueous potassium trioxalatoferrate (III) sample with photoreaction excitation light and measure the photons absorbed. Then the number of photons absorbed was determined from the amount of iron (II) produced in solutions with different irradiation periods in accordance to the relevant section in the fifth edition of "Jikken Kagaku Koza" (Series of Experimental Chemistry), published by the Chemical Society of Japan. 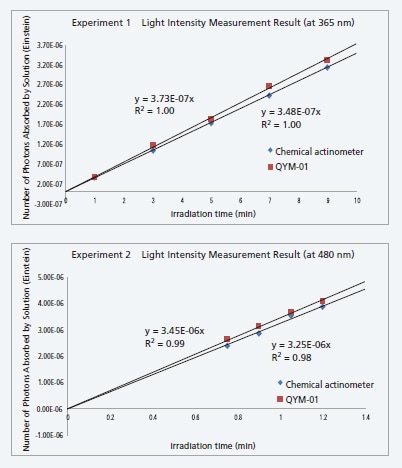