Due to the growing awareness of global warming, algal biomass has received attention as a new renewable energy alternative to oil resources. Algal production efficiency per unit area is higher than for corn and sugarcane. In addition, CO2 and organic drainage are used during algal cultivation, so benefits are also anticipated in terms of air and water purification. Moreover, policies have been raised in the U.S. and Europe that specify an increase in jet fuel bio ratios; as a result, increases in the demand for biofuel equivalents to jet fuel are anticipated. At present, there are issues with the high cost of algal biofuel production in comparison to crude oil. However, the algal biofuel market is expected to grow to the scale of 800 billion yen by 2020 in Japan (JETRO, 2013). Squalene (C30H50) is one of the oils obtained from algae. Since it is a hydrocarbon equivalent to heavy oil, it must be modified for use as a jet fuel. 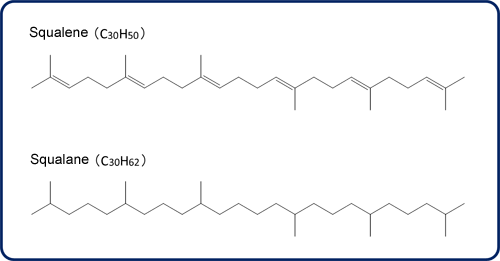 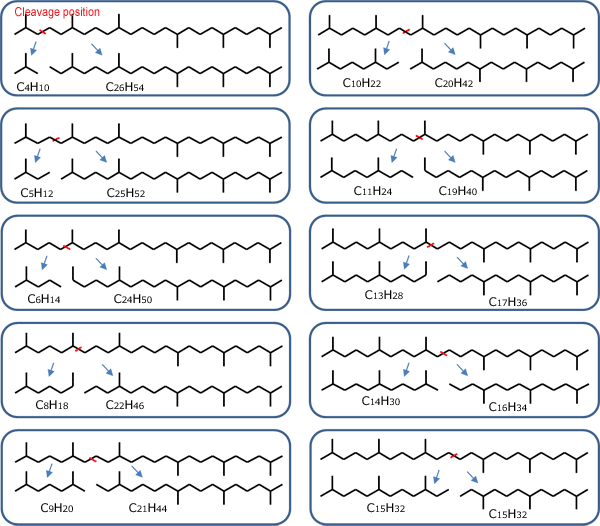 In the TIC chromatogram for the squalene hydrogenation degradation products (Fig. 3), it is evident that degradation products have been generated by the catalyst, since hydrocarbon peaks C12 to C29 can be observed in addition to the peak for the main component, squalane (C30). The intensities of peaks C12, C18, C23, and C28, which are shown in red circles, are less than for the other peaks, so it is believed that they are hard to generate in this catalytic reaction process. This means that an intermediate position between branches in the squalane molecule is selectively cleaved due to the action of this catalyst to generate degradation products retaining a branched structure.

It is possible to calculate the carbon number for these degradation products based on the molecular weight calculated using the chemical ionization (CI) method. For details on this analysis, refer to Application News M270 "Analysis of Hydrocarbons Using PCI-GC-MS". The samples in this investigation were kindly provided by Professor Tomishige of Hydrocarbon Chemistry, Resources and Environment Labs, Department of Applied Chemistry, Tohoku University.