To improve the efficiency of crystalline silicon solar batteries, passivation of the front and back surfaces is important in order to control recombination of the carriers generated. Fourier transform infrared spectrophotometers (FTIR) are effective at evaluating Si-H in hydrogenated amorphous silicon (a-Si:H), a material used for these passivation films.

This report introduces the results of measuring the Si-H peak in hydrogenated amorphous silicon films.
The measurements were performed with the transmission method, as well as the ATR method using a single reflection ATR accessory (MIRacle Ge prism).
The samples were hydrogenated amorphous silicon films with different thickness (11 nm, 22 nm, 45 nm, and 90 nm), formed on silicon substrates. 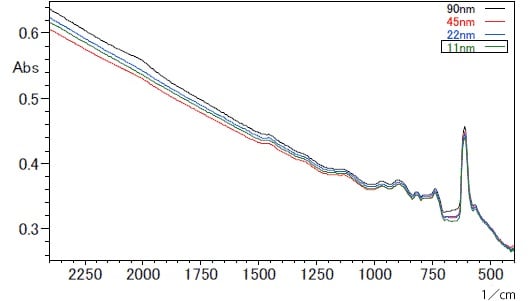 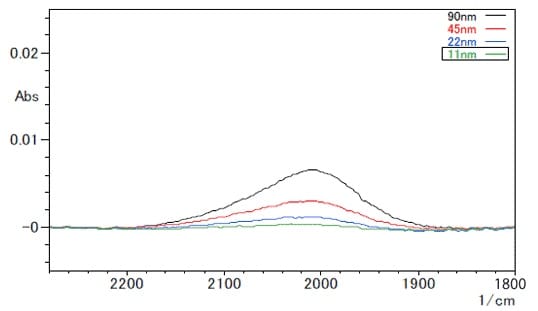 Next, the same samples were measured using the single reflection ATR accessory.
Fig. 3 shows the data obtained after baseline correction, shown with the same vertical axis scale as in Fig. 2.
In comparison to the transmission method, high-sensitivity measurements were possible with more than twice the intensity, showing that this method is effective for measuring films with thickness of approximately 10 nm. 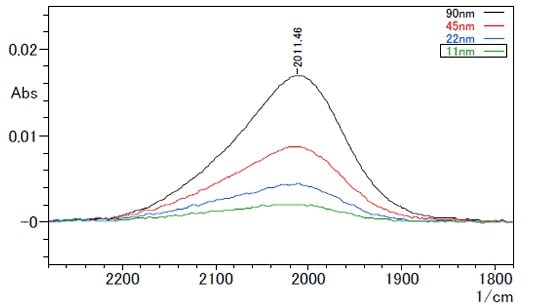 Samples were supplied by Shinsuke Miyajima, Associate Professor at the Department of Physical Electronics, Graduate School of Science and Engineering, Tokyo Institute of Technology.

The sample is placed in contact with a prism with a diameter of approximately 2 mm. Liquid samples can be measured by placing a drop of the sample on the prism. Measure plastics, fibers, films, powders and other solid samples by pressing them against the surface of the prism.