Impurities can be checked via GC-MS with the same analysis conditions as USP 467!

At present, the HS-GS-FID method has been adopted for tests of residual solvents in pharmaceuticals, but unknown peaks that are not target solvents are sometimes found in such tests. GC-MS is effective for the qualitative analysis of these unknown peaks.
Conventionally, however, when GC-MS was used, analysis could not be performed with the analysis conditions specified in the United States Pharmacopeia (USP 467), which is used for tests of residual solvents in pharmaceuticals. Accordingly, it was necessary to change the analysis conditions.

The Shimadzu GCMS-QP2020/QP2010 Ultra gas chromatograph mass spectrometers adopt a differential vacuum system for high vacuum performance. As a result, they enable GC-MS analysis using wide bore (0.53 mm) columns, which was previously difficult to perform.
In addition, by connecting the optimal size a of a flow restrictor to the column outlet, GC-MS analysis can be performed with the same column linear velocity as the analysis conditions specified by USP 467. Therefore, it is possible to obtain GC-MS chromatograms equivalent to the GC test results for residual solvents, enabling efficient qualitative analysis of unknown peaks.
Furthermore, using the Shimadzu HS-20 headspace sampler, which features a trap function, for the headspace area will also prove effective for the mass spectral extraction of micro peaks.

The following shows an example of an analysis of a Class 2 residual solvents standard solution, as well as the confirmation of impurities, using a headspace analysis system that combines the HS-20 and the GCMS-QP2020/QP2010.

Fig. 1 shows the results of measuring a Class 2 residual solvents standard solution (water-soluble articles) using a 30 m column with an internal diameter of 0.53 mm, compared to the results obtained from separate measurements by GC-FID. With a 30 m L. x 0.53 mm I.D. column, the column outlet pressure will be negative, so the flow rate prescribed in Procedure A cannot be set. Here, the linear velocity of 35 cm/s prescribed in Procedure A was achieved by connecting an 82 mm L. x 0.18 mm I.D. flow restrictor to the column outlet, and a chromatogram pattern approximating the GC-FID results was obtained. The column flow rate with GC-MS was calculated at 4.86 mL/min, but measurements were not a problem for the GCMS-QP2020/QP2010 Ultra because of their high vacuum performance. 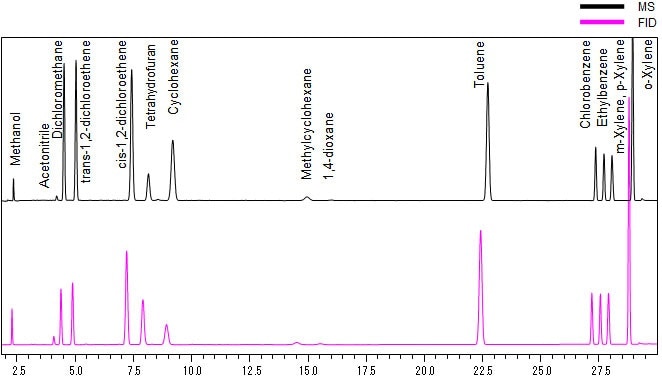 Fig. 2 shows an example of the measurement of a commercially available pharmaceutical drug test solution using a 30 m L. x 0.53 mm I.D. column. The peaks ((1) and (2)) not contained in standard solutions Class 1, 2A, and 2B were confirmed in both the FID and MS results. They were inferred from the mass spectra to be n-butanol and butylacetate, which fall under Class 3 compounds. When trap injection (5-cycle extraction) was performed, peak A, which was essentially undetectable with loop FID and GCMS analysis, was detected with high sensitivity, and was identified as ethyl acetate (Fig. 3). This shows how use of the HS-20 and GCMS-QP-2020/QP2010 Ultra simplifies the analysis of unknown peaks in tests for residual solvents in pharmaceuticals. 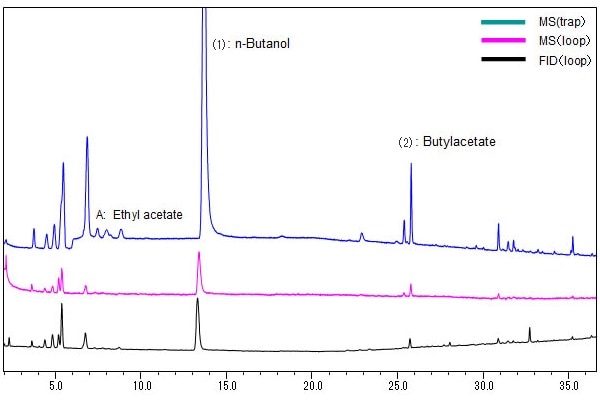 Fig. 3 Mass Spectrum for Peak A

For details, refer to GC-MS Application Data Sheet No. 90: Analysis of Impurities in Tests for Residual Solvents in Pharmaceuticals Using GC-MS. 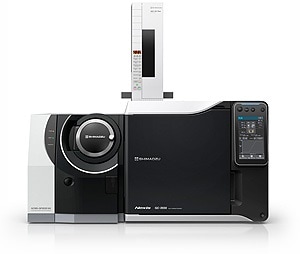 The HS-GC-FID method is adopted for tests for residual solvents in pharmaceuticals, but GC-MS is effective for confirming any unknown peaks (impurities) detected in such tests. Accordingly, use of the HS-20 and GCMS-QP2020 NX / QP2010 Ultra simplifies the analysis of unknown peaks in tests for residual solvents in pharmaceuticals.