Analysis of Omeprazole within USP and JP by “i-Series”

Omeprazole, a drug that effectively suppresses the excessive secretion of gastric acid, is often used for the treatment of gastric ulcer and duodenal ulcer, in addition to the treatment of reflux esophagitis. Acting as a Proton Pump Inhibitor (PPI), omeprazole is included in the WHO Model List of Essential Medicine, and considered an important component of basic medical care.
This Application News introduces an example of analysis of omeprazole in accordance with the Japanese Pharmacopoeia (JP) and the United States Pharmacopeia (USP). Also presented here is an example of analysis that can be completed in a significantly shorter time than that described in the USP General Chapter 621 Chromatography.
The Nexera-i integrated UHPLC was used for the analysis by the procedure described in the USP. The Nexera-i supports the use of analytical conditions specified for both HPLC and UHPLC. In the case of compliance (HPLC conditions) with the Japanese Pharmacopoeia, we conducted analysis using the Prominence-i integrated HPLC. 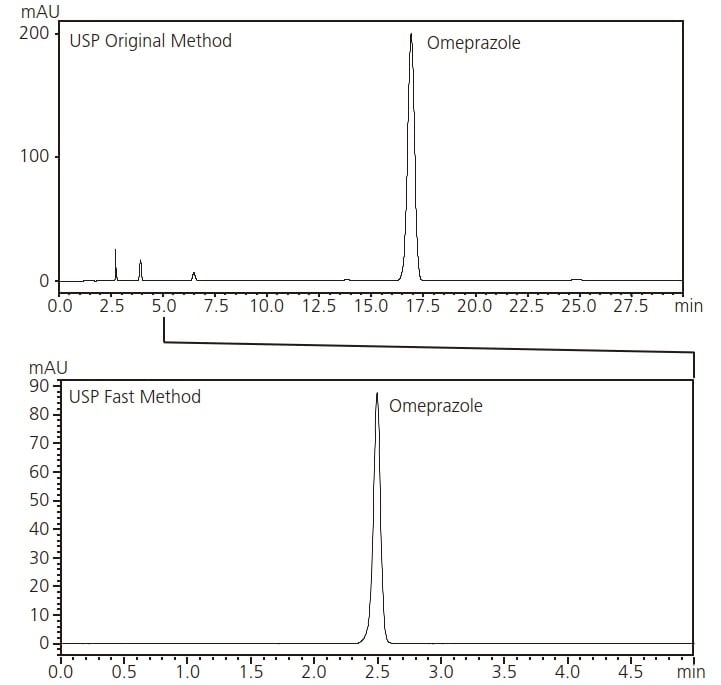