The physicochemical and pharmacokinetic properties of active pharmaceutical ingredients change depending on the counterion used, and during drug development various counterions are tested to select the optimum salt.
Residual inorganic impurities from catalysts or ions used during synthesis can also affect product solubility and stability, so it is extremely important that ion impurities are identified.
As mentioned above, drugs can contain multiple different counterions and it is sometimes difficult to separate completely the peaks of these ions using ion chromatography.
We describe an example analysis that uses ion exclusion chromatography to increase separation selectivity for formic acid, acetic acid, fumaric acid, and maleic acid, which are organic acids frequently used for drug counterions.

In ion exclusion chromatography, retention strength is mainly determined by the degree of disassociation of the solute ion, and separation is performed based on the quick elution of strong acids that are unable to enter packing material pores due to a strong electrical repulsive force, and the delayed elution of weak acids that are able to enter packing material pores due to a weak electrical repulsive force.
We analyzed a 4-component standard solution containing acetic acid, formic acid, fumaric acid, and maleic acid using two ion exclusion columns.
The analytical conditions are shown in Table 1. A UV-VIS detector was used, and an aqueous solution of perchloric acid was used as the mobile phase because it is a poor absorber of UV. The results obtained after injecting 10 μL of standard solution are shown in Fig. 1.
The number of columns (i.e., the size of the separating space) and column temperature are important factors in the separation of multi-component mixtures of organic acids using ion exclusion chromatography.
Consequently, two columns and a column temperature of 50 ˚C were used for the analysis of formic acid, acetic acid, fumaric acid, and maleic acid. 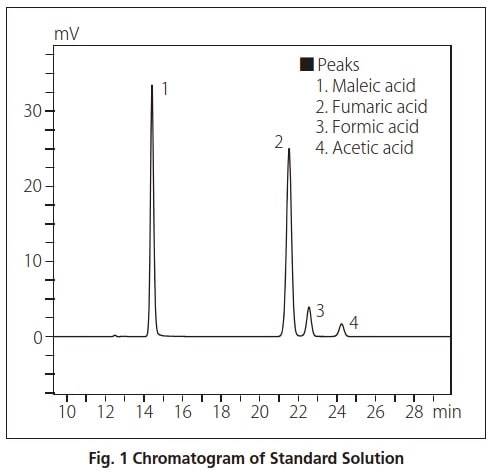 The Nexera Organic Acid Analysis System has been well-received in the fields of food and environment as a highly selective high-sensitivity system. It uses separation by ion exclusion chromatography and Shimadzu’s unique detection technique (pH-buffered electric conductivity detection). Recently, this system is being utilized by even more users in a wide variety of fields, and its usage in the fields of pharmaceuticals and life science is increasing.