Typically, a variety of counterions are used to selecting the optimum salts in the development stage of a pharmaceutical product because the physicochemical and pharmacokinetic properties associated with the active pharmaceutical ingredients (API) will vary depending on differences in counterions. Furthermore, as inorganic substances such as catalysts and ions used during synthetic process may affect such properties as solubility and stability, it is very important to conduct analysis of ionic contaminants. In order to eliminate the impurities from the synthesized API, HPLC is commonly used for fractionation and preparative purification. For the preparation of mobile phase, acetic acid, formic acid, trifluoroacetic acid, and their salts are used as additives for easier post-processing. Additionally, in the solid phase synthesis of peptides, trifluoroacetic acid or its salt is used for the isolation of the synthesized peptide from the solid phase, so trifluoroacetate becomes the counterion for the peptide that is the principle component. In many cases, after that, salt replacement by means of acetate or chloride ions takes place before use. Consequently, such ions can become counterions or impurity ions in the API.
Here, we introduce some examples of the analysis of acetate, formate, chloride, and trifluoroacetate ions in a pharmaceutical product.

Analysis of Trace Amounts of Anions

A low-concentration analysis of acetate, formate, chloride, and trifluoroacetate (TFA) ions was carried out. Fig. 1 shows the chromatogram that was obtained from the standard solution. The retention time and the area repeatability (n = 6) are shown in Table 1, and the analytical conditions used are shown in Table 2. 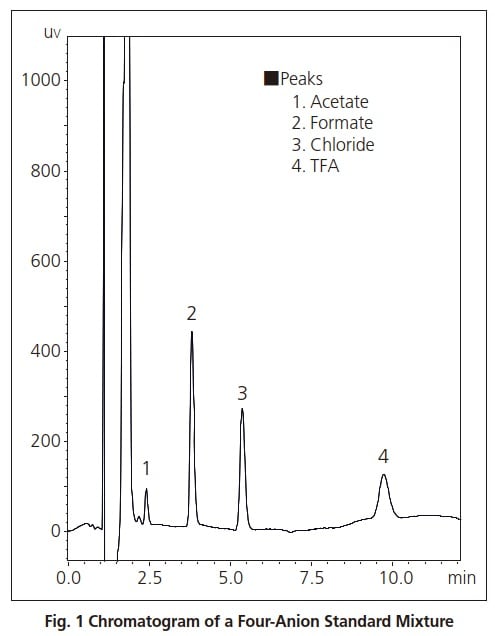 The HIC-ESP is a new anion suppressor ion chromatograph with built-in electrodialytic suppressor, boasting the same low carryover and excellent injection precision characteristic of Shimadzu HPLCs to bring you highly-reliable results. The newly developed anion suppressor prevents peak spreading and achieves high sensitivity, providing stable functionality even over long periods of use. The HIC-ESP is suitable for applications in a wide range of fields including environmental science, medicine, chemistry and food science.