The GC/MS scanning method is the gold-standard approach to toxicology analysis, indispensable for the identification of toxicological substances.

Data processing using the mass spectrum library involves looking up the detected peaks and judging whether they correspond to a known drug compound. However, target peaks may be missed if they overlap with interference peaks from the biological sample, or if they are buried in a TIC (total ion current chromatogram) because of their low concentration.

With this database, the mass chromatogram is used to search for peaks and identify them based on three types of information stored in the database: retention time, ion ratio and mass spectrum. In this way, the presence or absence of each drug can be verified, and there is no need to check the TIC, which often contains a large number of impurities. Data processing can be carried out more quickly while minimizing the risk of overlooking any target compounds.

The retention times of all compounds listed in the method file can be simultaneously corrected to your GC-MS system with the Automatic Adjustment of Retention Time (AART) function. The multiple n-alkanes used as references from low to high boiling points allow precise correction over a wide range of retention times. 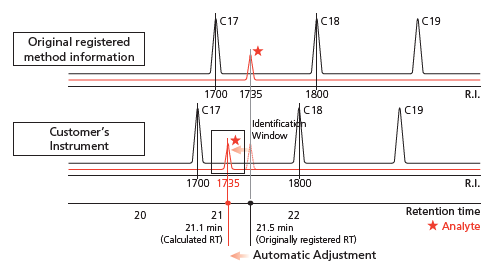 Support for volatile toxic substances with an HS-20 headspace sampler

The database also includes a method for calculating semi-quantitative values. Simply add internal standards to the test sample before measurement to estimate its concentration. This is useful for setting the concentration range of the calibration curve for precise quantitation.

The MS/MS mode of the GCMS-TQ series enables the user to comprehensively detect and estimate the likely structure of cathinones or synthetic naphthoylindole cannabinoids.

It is possible to comprehensively detect approx. 1300 types of cathinone via α-cleavage into benzoyl and amine ions which are measured by MRM and product ion scans with GC-MS/MS. Cathinone structure can be estimated from the MS/MS results. It is difficult to distinguish the functional group on the amine with an EI scan due to the large number of isomers, but it is relatively simple to differentiate structural isomers with a product ion scan. 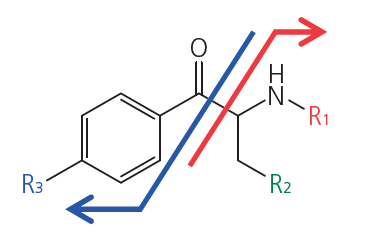 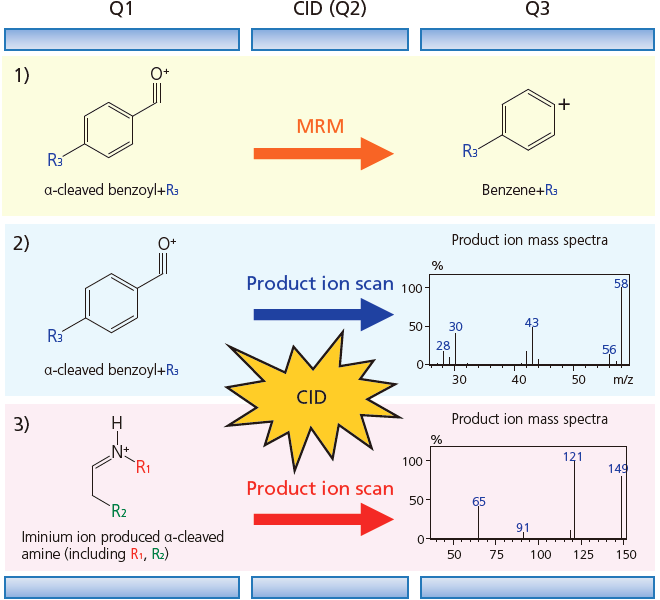 It is possible to comprehensively detect approx. 800 kinds of naphthoylindole cannabinoids via EI ionization cleavage into a naphthoylindole and an indole carbonyl. Structure of these parts can be inferred from GC-MS/MS precursor ion scans and MRM.

The three peaks from the different MS/MS modes have the same retention times, so it is possible to comprehensively detect all naphthoylindoles and estimate the functional groups R1-R3.