Peaks with similar boiling points that could not be separated adequately with one-dimensional chromatography can now be separated based on differences in polarity. This allows analysis of components that previously were difficult to separate in samples with complex matrices.

GCxGC provides image patterns that can be correlated to compound structure; this capability is especially useful for grouping analysis of mixtures containing many components.


Analysis of Diesel Oil
The image shows patterns that indicate the number of benzene rings and number of carbons.

Comprehensive chromatography will be contains enormous peaks. To certainly detect these peaks, UFMS (Ultra Fast Mass Spectrometry) must be need. Shimadzu's UFMS technologies, which minimize sensitivity losses even at faster scan speeds, can detect these peaks. 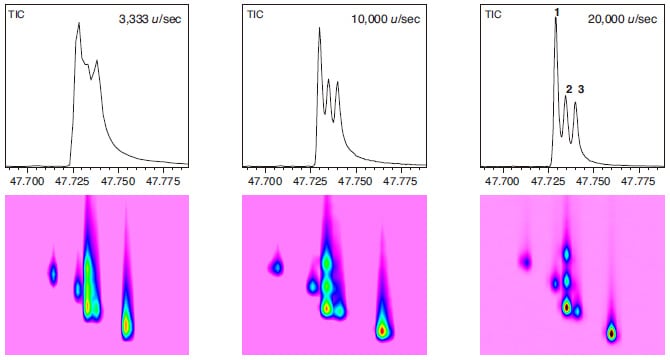 The rod bias voltage is automatically optimized during high-speed data acquisition, which minimizes sensitivity deterioration during high-speed scans of 10,000 u/sec or faster. The sensitivity obtained is at least five times better than with conventional systems. This is effective for scan data sensitivity improvements and favorable mass spectrum acquisition, particularly in high-speed analysis with Fast-GC/MS, simultaneous Scan/SIM, FASST analysis, and applications using GC × GC-MS. (Patent: US6610979)