Easy to Operate Even for Novices

This screening system consists of a sampling toolkit, special standards, and special software and can be easily operated even by novices. 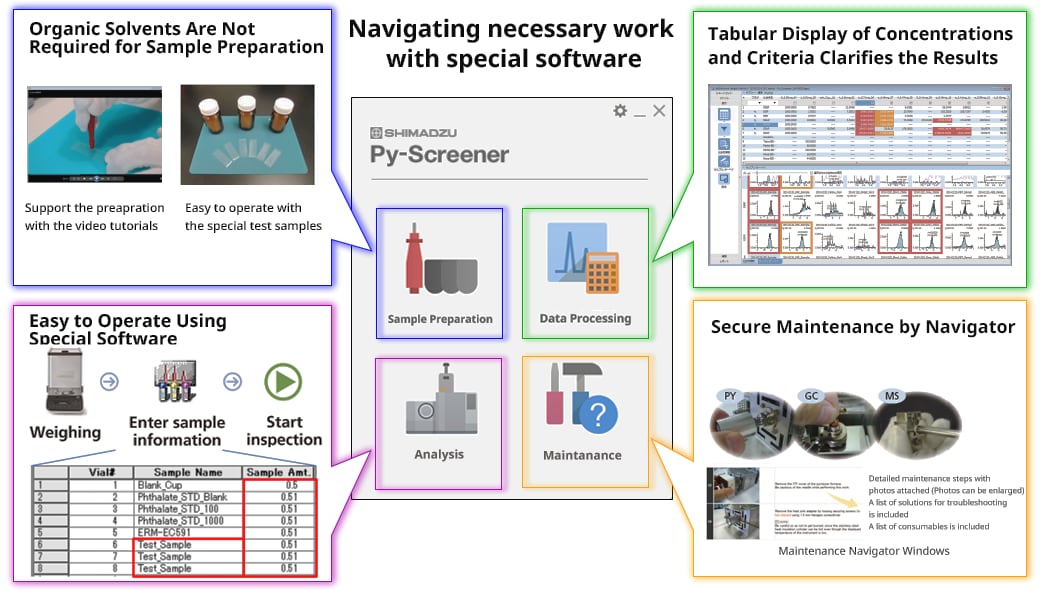 The sample preparation videos can be viewed on smart devices by accessing them here. The user name and password attached to the product are necessary to access this link.

A method has been developed that significantly shortens simultaneous inspection times for phthalate esters and brominated flame retardants. This enables productive and reliable inspections for a wide range of regulated compounds.

The system can perform batch inspections for phthalate esters and a total of twenty PBBs and PBDEs with between one and ten bromine atoms. With the new "correction factor database" function, the software automatically generates calibration curves for the compounds not included in the standard sample based on the calibration curve information of the standard sample, allowing the concentration of all of the above compounds to be calculated. A simultaneous screening method for phthalate esters, PBBs, and PBDEs using Py-GC/MS has been studied for standardization under the international analytical standard IEC 62321 3-3.

Note: The same standard sample used in Ver. 1 is used in Ver. 2. However, calibration curve information obtained with conventional products cannot be used with Ver. 2.

Phthalate Ester Screenings in Accordance with the European REACH Regulation

The system is now compatible with inspections with Shimadzu's SH-1MS high-durability column, which includes a guard column as part of its design. This reduces the maintenance burden and running costs by limiting column deterioration, even for customers who screen frequently.