A large-capacity differential exhaust turbomolecular pump and a high-performance flow controller ensure that the utmost in sensitivity is obtained under all conditions used for GC. This sensitivity combined with high-speed analysis capabilities helps maximize laboratory efficiency by reducing analysis times. In addition, the system can be safely operated using carrier gases other than helium, such as hydrogen or nitrogen, thereby reducing operating costs.

A new flow controller (AFC) with a CPU uses various control methods to control carrier gas flow to a constant flow speed, flowrate, or pressure. It can also accurately trace the analytical conditions already being used. The split line filter can be replaced without any tools. Internal contamination can be confirmed visually, ensuring filters are replaced at the proper time.

Through adoption of a new type of turbomolecular pump with increased exhaust efficiency, the system's performance is greatly improved when using hydrogen or nitrogen, in addition to helium, as the carrier gas. Moreover, a differential exhaust method is used to create a vacuum separately for the ion source and the quadrupole. As a result, an optimal MS state can be realized regardless of the conditions imposed by the carrier gas used.

The injection port can be opened or closed without tools by simply sliding the ClickTek™ lever. Replace the insert, slide the lever and feel the click for a leak-free install every time.

The rod bias voltage is automatically optimized during high-speed data acquisition, which minimizes sensitivity deterioration during high-speed scans of 10,000 u/sec or faster. The sensitivity obtained is at least five times better than with conventional systems. This is effective for scan data sensitivity improvements and favorable mass spectrum acquisition, particularly in high-speed analysis with Fast-GC/MS, simultaneous Scan/SIM, FASST analysis, and applications using GC × GC-MS. (Patent: US6610979)

Hydrogen and nitrogen are less expensive than helium and are readily available, so they are attracting attention as alternative carrier gases. The high-performance Advanced Flow Controller (AFC) provides accurate control even with hydrogen and nitrogen. In addition, the new large-capacity differential exhaust system enhances the vacuum performance when hydrogen or nitrogen is used as the carrier gas, so the optimal MS state is achieved under all carrier gas conditions.

Hydrogen and nitrogen provide less sensitivity than helium. However, chromatogram patterns equivalent to when helium is used can be obtained by using a short column with a narrow internal diameter. EZGC® Method Translator*1, a method conversion program provided by Restek, can convert the analysis conditions when helium is used to the optimal analysis conditions for the alternative carrier gas. 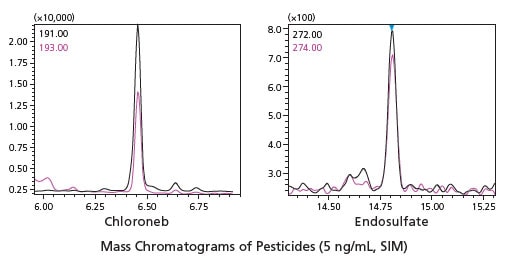 The retention indices are essentially unchanged even when the conventionally used analysis conditions are converted for using hydrogen as the carrier gas.
Mass spectral libraries containing retention indices and databases provided by Shimadzu should be used.

A hydrogen sensor (optional) can be installed inside the GC. By discovering potential leaks in advance, accidents can be prevented. Furthermore, the main unit is equipped with an automatic carrier gas leak checking function, which strongly supports the use of hydrogen as a carrier gas.

Dramatic improvement in the efficiency of multicomponent simultaneous analysis

The efficiency of multi-component simultaneous analysis is dramatically improved thanks to Smart SIM™, which simplifies and automates the method creation, and LabSolutions Insight™ software, which greatly reduces the time needed for analyzing data. In addition, databases specialized for specific fields are provided, so regardless of the field in which quantitative analysis is to be performed, highly reliable data can be obtained as the result of the optimized analytical conditions.

The Smart SIM automatic method creation function automatically configures the SIM program to suit the retention times.
Even in cases where there are a number of compounds and they are apportioned to multiple methods, the methods can be integrated while maintaining the sensitivity as is. This significantly reduces the number of analysis cycles and the measurement time, improving productivity.

All compound information contained in methods for currently used Shimadzu GC/MS systems can be stored in the database simply by selecting the files.

High-sensitivity, high-accuracy analysis is enabled in comparison to the group measurement method. In a batch analysis of 434 components, favorable repeatability and calibration curves were obtained, even down to the trace-quantity region, improving quantitative performance.

LabSolutions Insight has been designed to drastically simplify the review process and transform data processing. 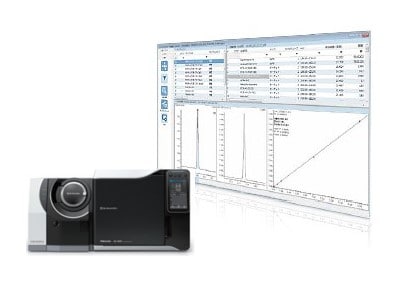 Easily obtains all the information required for qualitative analysis

With GC/MS, which has significant qualitative capabilities, a wealth of fragment information is obtained, so it is used as a means of identifying unknown compounds. A mass spectral library is generally used as a means of compound identification. However, experience with compound identification is required if the compound is not registered in the mass spectral library, or there are a number of compounds with similar structures. With the GCMS-QP2020 NX, in addition to the mass spectrum, three kinds of value-added compound information are used in combination to support high-accuracy qualitative analysis.

Databases are available with retention indices specific to a variety of application fields, including foods, chemistry, fragrances, forensics, and metabolite component analysis. In addition to mass spectra, searches are performed in combination with retention indices, which are very highly compound specific, so isomers and compounds with similar structures are accurately identified.

The Smart EI/CI ion source has been developed in order to acquire CI data without switching the ion source, and without losing the sensitivity of EI, which is most commonly used. Even when it is difficult to perform identification with the EI mode using the mass spectral library, molecular weight information can be obtained from CI data, thus helping in the estimation of unknown compounds. 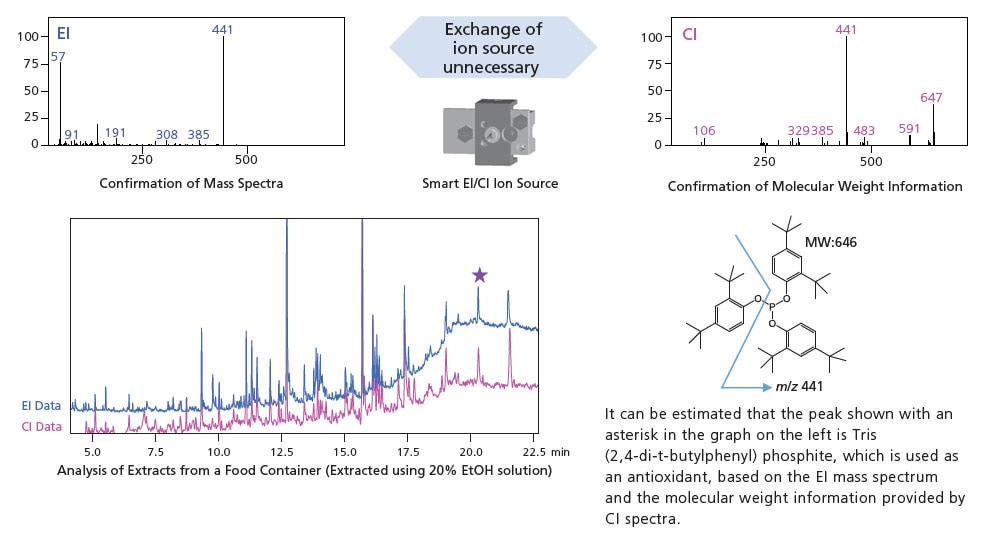 The MassWorks software calculates the theoretical accurate mass from the quadrupole MS mass profile. It then outputs candidate compositional formulas based on isotopic ratios and the theoretical accurate mass. This software is useful for estimating the composition of compounds that are not registered in a mass spectral library. The GCMSsolution™ software can simultaneously output GC/MS data and mass profile data. The majority of compounds detected with the GC/MS data can be identified from a mass spectral library. MassWorks is then used to estimate the composition of any compounds that are not identified, further increasing the quality of the qualitative analysis. 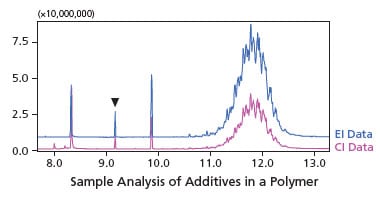