Various principles are used for measuring the weight of objects. The following briefly describes the operating principles and features of the two most popular methods, "electromagnetic type" and "load cell type."

This is also called the "electromagnetic balance method." With mechanical balances, the sample is placed at one end of the beam and the weight is placed at the other end, and the value of the weight when both are perfectly balanced becomes the mass of the sample. With electromagnetic type balances, an electrical force (electromagnetic force) is applied instead of a placed weight to balance the beam. The amount of electricity required for balancing the beam changes according to the weight of the sample that is placed. The amount of current when the beam is perfectly balanced is detected, and the mass is obtained from that detected value. 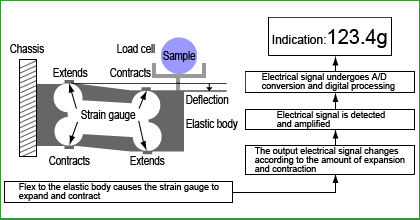