HPLC is the most popular method for analyzing amino acid components, which have currently gained attention due to the boom in health foods. This page discusses mainly the detection methods used to analyze amino acids.

Using UV detection for amino acids in most cases requires using the absorption of the carboxyl group (-COOH) in the 200 to 210 nm range. Some amino acids with benzene rings can also be detected in the 250 to 280 nm range, but in general, they are difficult to analyze as-is with sufficient sensitivity and selectivity.
Consequently, derivatization methods have long since been used. Since many amino acids contain amino groups (-NH2 and -NHR) in their structures, a derivatizing reagent that selectively reacts with the amino group is used.

n pre-column derivatization, the amino acids are derivertized before injection, and then the reaction products are separated and detected. This concept is illustrated on the right. The "labels" shown indicate the derivatizing reagent.

The advantages of this method are as follows: 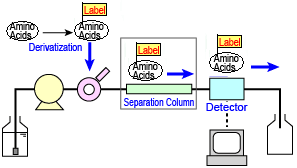 On the other hand, a disadvantage is that because the derivatizing reagent is mixed directly with the sample, reaction efficiency (yield) is easily influenced by sample matrix (such as coexisting components and solvent types). Therefore, pre-column derivatization can be considered appropriate when intending to analyze a somewhat limited variety of samples with high sensitivity. Pre-column derivatizing reagents most typically used for amino acid analysis are o-phthalaldehyde, phenyl isothiocyanate (PITC), fluorescamine, and dansyl chloride. Reaction procedures vary widely, from simply mixing at room temperature, for a reaction that proceeds quickly, to reactions that require heating or protocols that require post-reaction cleanup. In many cases, reversed-phase chromatography is used to separate reaction products. Normally, reversed-phase chromatography is not well suited to separating highly-hydrophilic substances such as amino acids. However, because pre-column derivatization derivatizes samples before they are introduced to the column, amino acids can be modified with highly-hydrophobic functional groups to enable reversed-phase chromatography. Since reversed-phase methods provide excellent separation, it allows extremely high throughput analysis, depending on how parameter settings are configured. The following is an example using a Prominence UFLC system and a Shim-pack XR-ODS reversed-phase column to separate PTC amino acid derivatives (derivatized using a PITC reagent).

The advantages of this method are as follows: 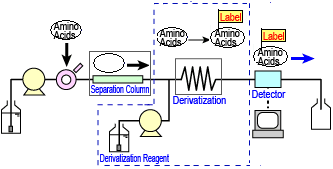 In contrast, its disadvantages include difficulty in increasing sensitivity and high consumption of reaction reagent, which is kept constantly flowing.
Based on these factors, once the reaction system has been optimized, post-column derivatization can be applied to a wide range of samples,be considered a technique that offers excellent quantitative performance and that is appropriate for routine analysis.
Because the reaction reagent flows continuously to the detector, post-column derivatization is limited by not permitting the detection of unreacted reagent, which limits the types of reagents that can be used. Currently, there are mainly two types of reagents available for use in analyzing amino acids, ninhydrin and o-phthalaldehyde. The former is for visible absorption detection and the latter is for fluorescence detection.

The method most commonly used for separation is cation exchange chromatography. Amino acids are zwitterions that include both amino and carboxyl groups in its structure. Therefore, the higher the acidity of amino acid (the more likely it is to form anion) during the cation exchange, the faster the elution, whereas the higher the basicity of amino acid (the more likely it is to form cation), the slower the elution. By the way, though reversed-phase is currently the main method used for HPLC, why is cation exchange used? Cation exchange is used because it is able to easily and efficiently separate amino acids from each other and separate them from substances containing amino groups (amines).
For highly-hydrophilic amino acids, reversed-phase chromatography might not provide adequate retention or selectivity. Using the cation exchange method efficiently separates multiple amino acids.

In addition, since the derivatizing reagent used for amino acid analysis reacts with amino groups, it will also react with typical amines., These amines might be detected as peaks on the chromatogram. However, most amines do not have an anionic functional group, such as a carboxyl group, like amino acids so they tend to be more basic than amino acids and elute more slowly if the cation exchange method is used. In other words, using the cation exchange method prevents amines from interfering with amino acid quantitation.
In this way, combining cation exchange chromatography, which is able to separate amino acids from each other or from other amines, together with post-column derivatized detection, which is able to selectively react with amino acids, makes an ideal "marriage" of methods.

The following chromatogram is an example from analyzing a popular amino acid beverage using post-column derivatization with o-phthalaldehyde. (Gt) 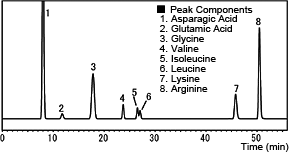