What is Multidimensional Chromatography?

Equation (1) indicates that the resolution is the difference between peak retention times divided by the average peak width. In a peak with Gaussian distribution, the peak width is W = 4 σ (where σ is the standard deviation) and the peak FWHM is W0.5h = 2.354σ. Substituting these relationships into equation (1) gives results in equation (2). 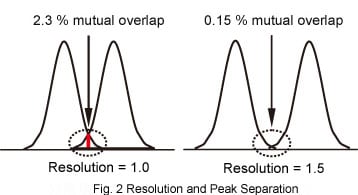 The resolution can be expressed in terms of the number of theoretical plates, separation factor, and retention factor, as shown in equation (4).