Silica gel is an amorphous silicic acid polymer represented as SiO2-nH2O. On the surface of silica gel are found silanol groups (Si-OH), of which there are three known types: isolated, vicinal (hydrogen bonded with a neighboring silanol group), and geminal (Fig. 1). Silanol groups generally exhibit weak acidity, though it can vary in strength depending on the individual state of the group.

Silanol groups serve as adsorption active sites in adsorption chromatography. They are essential groups used to add stationary phase functional groups by chemical bonding, which is described below. 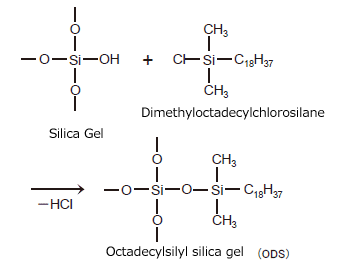 Generally, monomeric stationary phases are easy to synthesize and their synthesis is highly reproducible, while their drawbacks include poor durability and poor retention capacity. Meanwhile, polymeric stationary phases are very difficult to synthesize, but many different shapes and stationary phase functional groups can be introduced depending on the synthesis conditions. Furthermore, polymeric stationary phases have good retention capacity and are highly durable.
However, neither type is necessarily better than the other, since which type is most appropriate depends on the analysis being performed. Characteristic differences are also present between manufacturers, and packaging material selection requires a certain amount of trial and error and use of technical materials and data provided by the manufacturer.