As MS operates in high vacuum, it is necessary to ensure that the LC parameters and mobile phases (liquid inlet) are compatible to MS. Usually when switching from LC to LCMS analysis, the current LC conditions can be used if the mobile phase is volatile. If involatile (e.g. phosphate buffer), modifications (e.g. chromatography mode, column, type and volatility of mobile phase) is required. This should be investigated stepby- step to allow better interfacing with LCMS. As mentioned in Chapter 1, there are a variety of separation modes for LC (Table 1) and the types of stationary phase and mobile phase can be modified based on sample characteristics, the desired level of separation, ionization level and MS compatibility.

A great starting point would be to use volatile mobile phases. A list of mobile phases suitable for API and LCMS are summarized in Table 3. In addition to the fundamental mobile phases such as water, methanol and acetonitrile, acetic acid is also commonly used to adjust the pH level. For buffer solutions, volatile salts such as ammonium acetate and ammonium formate are used. Also, volatile ion-pair reagents can be added to the mobile phase to facilitate the separation of polar compounds using reversed-phase LC. These reagents, which have a long hydrophobic tail and a polar ionic group, tend to attach to the stationary phase of the column with the ionic group sticking out. In the presence of ion-pair reagents, polar compounds interact with the charged ionic groups of the ion-pair reagent and gets retained and separated in the reversed-phase column. With focus on the ionization efficiency, protic solvents are essential for generating reaction ions for APCI, and polar solvents are essential for ESI since they are required to dissolve polar or ionic compounds.

A key point to note is involatile salts, such as phosphate buffer solution, is not suitable for use in LCMS. Involatile salts form precipitates at the LCMS interface, which immediately causes sensitivity drop by affecting the electrical fields applied for ionization and ion transfer. It can further cause physical damage, such as contamination on the needle electrode for APCI or by inducing electrical discharge (spark). Also, nonpolar solvents, such as hexane, contribute very little to ionizing sample molecules using APCI. Therefore, analytical conditions that use such mobile phases cannot be used without modification.

In the event that they may be limitations to the mobile phase choices and changing may pose a challenge to the LC separation, post-column addition or modifications (prior to MS) may be a good alternative. In addition, there is the trap-free 2D-LC-MS/MS technique that can be used to change the mobile phase to ensure compatibility with MS. Also, better LC separations and easier interfacing to LCMS can be achieved by switching the type of LC columns. For example, if the C18 (octadecyl) column for reversed-phase mode is used, we can try switching to C30 column to increase retention or C8 or C4 to reduce retention, or -phenyl or -CN column to increase separation selectivity. If the difference in elution times is too great or peaks are too broad, gradient elution program can be utilized. If the mobile phase and salt concentration are suitable for API, then different chromatography mode (e.g. size exclusion or ion exchange) can be used as well. 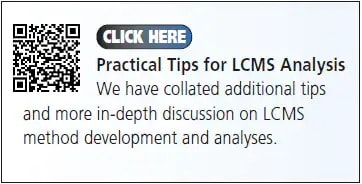 In summary, this chapter covered the basic components of a LCMS system and the various ionization methods used in LCMS. The factors that limit the sensitivity of the API techniques and the need to select appropriate analytical conditions for LCMS are discussed to aid in your analyses and give a better understanding of the LCMS interface. 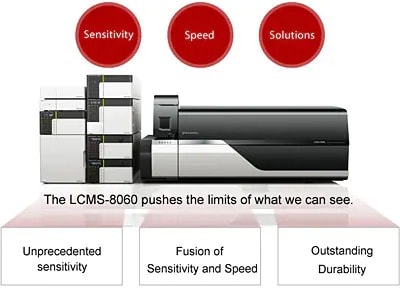