MS require ions to be in the gaseous phase and these ions are detected under high vacuum in the MS. In the case of GCMS, target compounds are already separated and eluted in the gaseous state. In this case, they can be directly introduced to the MS unit. The gaseous compounds are ionized through various methods such as electron ionization (EI) and chemical ionization (CI).

In EI, gaseous analytes are passed through a curtain of high-energy electrons where electron impact induces ionization of compounds. This high energy ionization fragments the compounds to produce ions of smaller m/z. This is considered a "hard" ionization due to the high degree of fragmentation. The higher the energy provided, the larger the degree of fragmentation. Figure 6 shows the difference in the mass spectrum of riboflavin (vitamin B2) when it undergoes EI verses when it undergoes a "soft" ionization like ESI, where the molecular ion and its adducts are commonly observed. Given that the energy provided by EI is uniform (e.g. 70 eV), the electron ionization and fragmentation process is very reproducible, generating the same fragment ion species at pre-determined intensity ratios. For this reason, the mass spectra produced by EI is commonly used to identify unknown samples and peaks by matching acquired spectra to the spectrum library contained in the compound database.

However, EI is considered not applicable to LCMS. In the EI chamber, high-energy electrons used for ionization are produced by passing a current through a metal filament in high vacuum. With LCMS, the LC flow is incompatible with the high vacuum system required in EI and the heating of the metal filament at atmospheric conditions causes it to burn and evaporate (e.g. oxidation of tungsten filament at high temperature). As a result, the use of EI in LCMS is not suitable due to the vastly different conditions that they each operate in, which ultimately created mechanical difficulties and interfacing issues. Therefore, it is crucial to have an interface to connect the LC outlet to the MS inlet that can efficiently transfer the LC mobile phase to gas and at the same time ionize the analytes.

Various interfaces for LCMS were developed, but issues with sensitivity, stability and user-friendliness were faced. After further improvements and developments, API, a type of soft ionization technique, proved to be well-suited for use in LCMS. As its name suggests, it ionizes compounds under atmospheric pressure conditions, which makes it especially useful for removing solvents outside a vacuum. API serves as both the ionization source and the interface in a LCMS system. In general, ions generated by API are stripped of solvent, focused into a beam using an ion guide, and finally introduced into the mass analyzer. Three API techniques are described here, namely the electrospray ionization (ESI), atmospheric pressure chemical ionization (APCI) and atmospheric pressure photoionization (APPI).

ESI generates ions by first drawing and spraying sample solutions at the tip of a capillary tube, where a high voltage of about ± 3 to 5 kV is applied. This generates a fine mist of charged droplets with the same polarity as the applied voltage. To accommodate a larger LC flow rate, the nebulizer and heating gas flows from outside the capillary to speed up the solvent evaporation process. As this process continues, the electric field on the droplet surface increases. When the mutual repulsive force of the charges exceeds the liquid surface tension (i.e. repulsion), fission occurs. It is thought that as this evaporation and fission cycle is repeated, the droplets eventually become small enough that the sample ions are liberated into the gas phase (based on the ion evaporation model). A schematic representation of the generation and desolvation processes in ESI for positively charged ions are illustrated in Figure 7. Similarly, negatively charged ion are generated by applying a negative voltage on the ESI probe.

ESI is one of the softest ionization method available, which means fragmentation is minimal and it can be used for highly polar, least volatile, or thermally unstable compounds. Since most of the compounds result in protonated (or deprotonated) molecular ions and adduct ions, without generating complicated fragment ions, determination of the molecular mass of compounds is very simple. 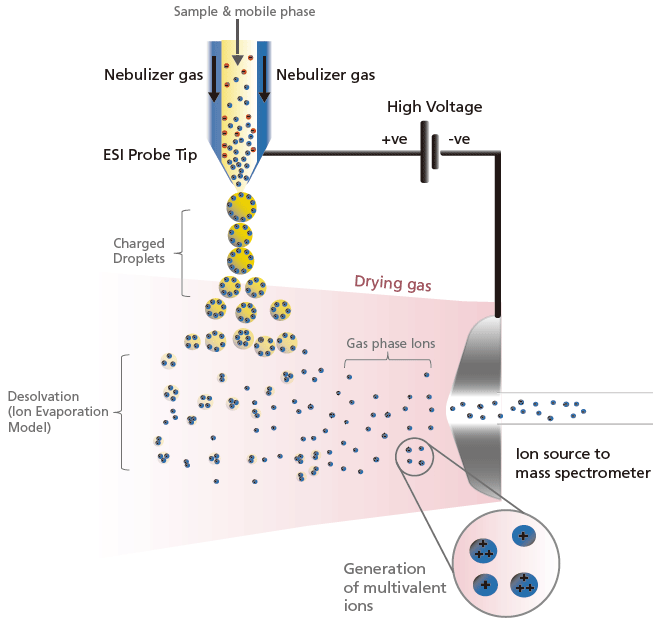 Figure 7. Schematic of the ionization and desolvation processes in ESI positive (+) mode.

In addition, ESI is known to occasionally generate molecular ions with multiple charges for compounds that have several potential charge-accepting functional groups. In the case of cations, this means multiple protons are added to form [M + nH]n+. The tendency to form multivalent ions is strongly influenced by the pKa of the compound relative to the pH of the solution. When the multivalent ion is observed, molecular mass information can be obtained even for compounds with a molecular mass that exceeds the measurement range of the mass spectrometer. It is also possible to use computer processing to predict the molecular mass from those multivalent ions. An example of myoglobin is illustrated in Figure 8. For myoglobin, ions with valences (n) from 10 to 20 were detected and molecular mass was calculated by deconvolution to be 16951.3. This uniqueness of ESI-LCMS allows the analysis and measurement of extremely large and highly-polar biological macromolecules, such as proteins and nucleic acids. This is vastly different from GCMS, which usually only provides peaks of z = 1.

The other API technique is APCI, which is a type of chemical ionization. Though the interface design is similar to ESI, the ionization principle differs, making it more suitable for low- and medium-polarity compounds (non-polar molecules). As illustrated in Figure 9, APCI vaporizes the solvent and sample molecules by spraying the sample solution into a heater (about 400 °C) using a gas, such as N2. Solvent molecules are ionized by the corona discharge needle to generate stable reaction ions. Protons are transferred between these stable reaction ions and sample molecules (ion-molecule reaction) and this leads to ionization. These ion-molecule reactions are known to involve several patterns, such as protontransfer reactions and electrophilic addition reactions. Unlike ESI, APCI involves a higher energy process and does not have the tendency to form multiply-charged ion [M + nH]n+. Consequently, it is commonly used for analyzing highly fat-soluble compounds or compounds that do not ionize in solution. 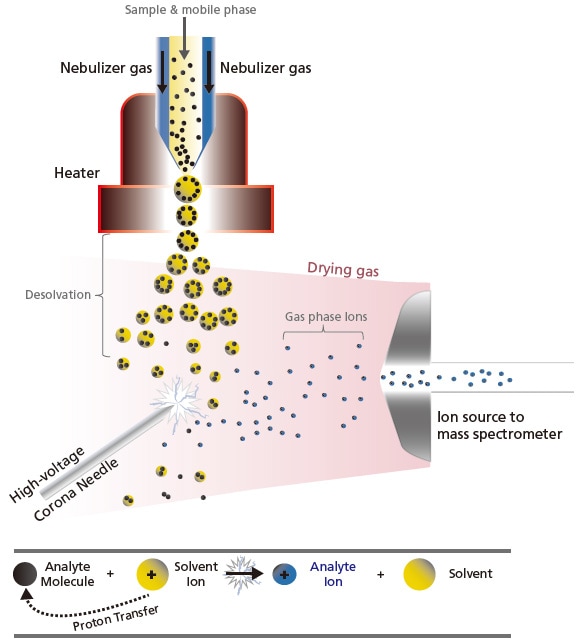 APPI ionizes analytes by irradiation of short-wavelength vacuum ultraviolet (VUV) light. The interface design in APPI (Figure 10) is very much the same as APCI, only with the swap of the high-voltage corona discharge needle to the VUV lamp. Similarly, the nebulizer and heater are used to create droplets and to vaporize the solvent. Upon VUV light irradiation, the analytes absorb a photon and get electronically excited. If the analyte's ionization energy is lower than the photon energy, the analyte ion that was ionized due to the photons may receive a proton from the hydrogen in the solvent, to become a protonated cation. This ionization technique achieves good sensitivity ionization with low to moderate polarity compounds (e.g. polycyclic aromatics). 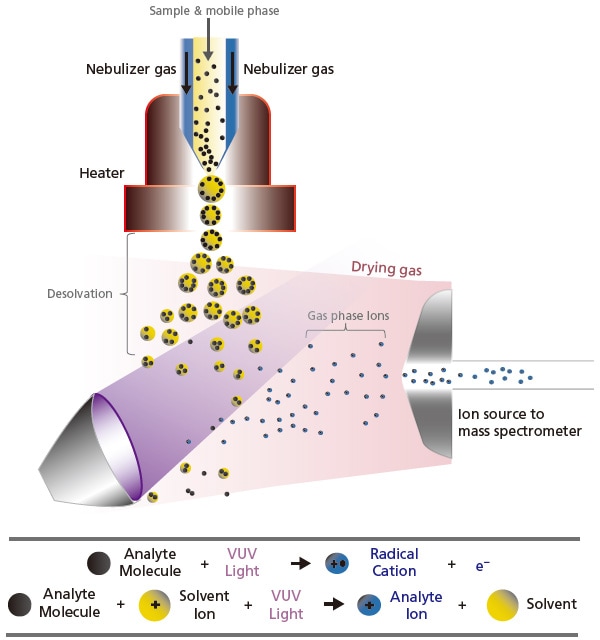 In summary, ions can be generated through either the continuous or pulsed (discontinuous) modes. The three API techniques (ESI, APCI and APPI) that were introduced operates in the continuous mode, giving a constant flow/supply of ions to the MS. On the other hand, the pulsed mode generates a discontinuous source of ions such as the Matrix-Assisted Laser Desorption/Ionization (MALDI). In this section, we introduced the LCMS components and discussed the principles of the various API options for LCMS interface. Next, we examined the efficiency of these ionization processes and the importance of selecting appropriate analytical conditions for LCMS. 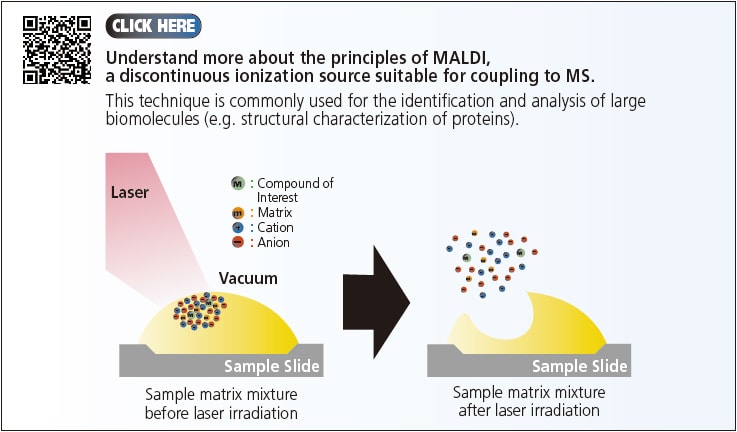 Several parameters affect the efficiency and sensitivity of these API processes (i.e. ESI, APCI and APPI). Apart from the instrument specifications and parameters, the limiting factors are:

Flow rate is one of the key parameters to achieve high sensitivity, especially for ESI. In LCMS, a semi-micro (2 mm internal diameter (ID)) LC column is preferred over the conventional (4.6 mm ID) LC column commonly used in HPLC. Using a smaller ID column, the optimum flow rate for chromatographic separation is lower, and lower flow rate generally increases the ionization efficiency of ESI. For this reason, a standard ESI ionization unit is designed to achieve an optimal sensitivity for the flow rate of 0.2-0.8 mL/min and sensitivity is typically compromised at higher flow rates.

Next, changes made to the mobile phases such as the types and pH of mobile phases and using additives can particularly affect the sensitivity of these API. Particularly for ESI, the formation of droplets and ions is crucial to achieve high sensitivity. it is important to obtain extremely fine droplets and liberate ions from these droplets by reducing droplet surface tension and optimizing droplet pH. For example in Equation 1, a basic compound (R-NH2) is commonly detected as positive ions [RNH3]+. By adding an acidic reagent (AH), it shifts the equilibrium to the right, which increase the production of the positive ions and thereby increase sensitivity. In general, a desired mobile phase has a pH value 1 or 2 lower than the pKa value of the sample. Conversely, for acidic compounds (Equation 2), sensitivity can be increased by adding a basic reagent (B) or by using a mobile phase with a higher pH than the sample pKa. In the case of neutral compounds without an ionic functional group, adding a volatile salt such as ammonium acetate can sometimes increase ionization efficiency as adduct ions.

In addition, it can be effective to increase the proportion of organic solvent to reduce surface tension and accelerate solvent evaporation. If using these additives affects the LC separation, the solution can be added post-separation (prior to MS analysis) as well.

In the case of APCI, it requires analytes to be thermally stable and volatile. It is ideal for the ionization of low to medium molecular mass compounds (e.g. polyaromatic hydrocarbons, carbohydrates and triglycerides) but not suited for macromolecules due to high boiling point. Ionization efficiency of APCI is governed more by the chemical property of solvent than analyte. APCI requires that the solvent is protic, i.e. has sufficiently high proton affinity to display hydrogen bonding, for it to mediate ionization of the analyte. If the use of a protic solvent is not suited for chromatographic separation, other nonprotic solvents may be used with a few percent of protic solvent added to assist ionization. In general, APCI can be used in reversed-phase, normal phase and size exclusion modes and is less affected by salts compared to ESI.

Figure 11. Illustration of the use of dopant to increase sensitivity in APPI.

In general, the selection of API techniques in LCMS is based on the analytes' polarities and properties. Table 2 summarizes the analyte properties required for the three API techniques. These API techniques can be further optimized by varying the mobile phases and flow rate to reduce matrix effects and improve efficiency and sensitivity. As described (Figure 4), ESI is generally selected for high-polarity compounds which can be typically found in drugs and pesticides, while APCI and APPI are usually selected for compounds having lower polarity, such as polycyclic aromatics and mycotic toxins.

In the event where analysis of multiple components with differing polarities and properties is required, some samples may need to be analyzed by multiple settings to cover the entire range of compounds. To shorten the total time required for analysis and method development, and to improve both laboratory efficiency and confidence in results, Shimadzu have developed the Dual Ion Source (DUIS) that enables simultaneous ESI and APCI. With this technology, it gives higher sample throughput where the both ionizations (i.e. ESI and APCI) can be completed in a single run.

Next >> Mobile phases compatible for LCMS 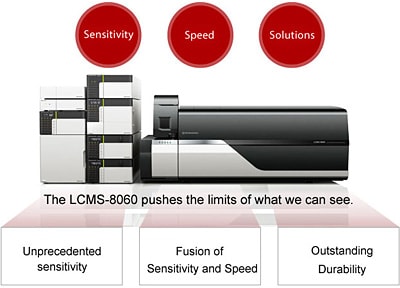