Differences Between Using Acetonitrile and Methanol for Reverse Phase Chromatography

The organic solvents most commonly used for mobile phases in reverse chromatography are probably acetonitrile and methanol. List prices (examples) for commercial reagents of these solvents are indicated below.

As shown, acetonitrile is very expensive, particularly for the LC grade. However, the analytical conditions indicated in reference materials and by LC manufacturers more often use acetonitrile. Why is that? That is the topic of this page. 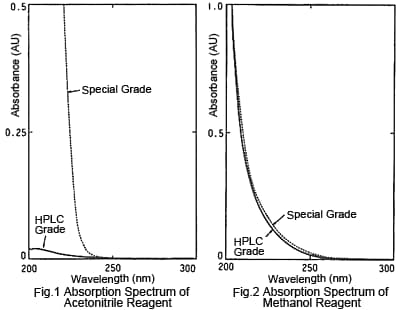 As a digression, the following describes an example of a problem that occurred regarding reagent grades. A certain person, "Mr. A," was measuring ephedrine in ephedra at 210 nm, but was only able to obtain data with higher noise than his predecessor. After becoming discouraged about his analytical skills, he happened to ask the predecessor again about the analysis and learned that the predecessor had used LC grade acetonitrile, whereas Mr. A had been using special grade, due to the expense. He was struggling to use a mobile phase with a background value several tens of times larger than that of the LC grade. Reportedly, after that he established a strict rule of always describing the reagent manufacturer and grade in analytical conditions.
In the case of methanol, there is not a significant difference in the spectra of LC and special grades, but absorbance is not guaranteed for the special grade, so it is more likely to have higher variability. Since the price is not that different, the LC grade should be used whenever possible. 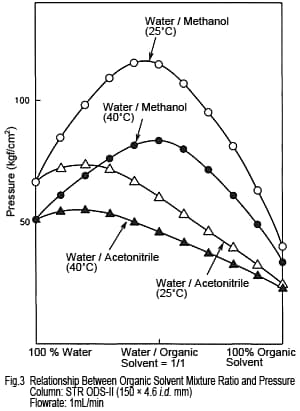 The pressure experienced by columns varies depending on the type and mixture ratio of organic solvents. Figure 3 shows the relationship between mixture ratio and delivery pressure for water/acetonitrile and water/methanol mixtures. The pressure for methanol increases when mixed with water, but not so much for acetonitrile. Consequently, given the same flowrate, acetonitrile-based solutions apply less pressure to the column. Based on the two issues discussed above, we have confirmed reasons for using acetonitrile. However, does methanol have any advantages beside price? We continue our comparison below.

When acetonitrile and methanol are respectively mixed with water in the same ratio, the acetonitrile-based solution generally has a higher elution strength. In particular, in some cases where the mixture ratio is low, the same retention times can be achieved using acetonitrile with less than half the ratio of methanol, as can be seen for caffeine and phenols (Figure 4).
On the other hand, for organic solvents at or very close to 100 %, methanol often has a higher elution strength, as can be seen for carotene and cholesterol (Figure 5). The properties of mixture solutions can be difficult to comprehend, but in cases such as this, the properties (polarities) of the individual solvents seem to come to the forefront.
For more extreme mixture ratios, such as 50:1, any operator errors during preparation can have a significant effect on retention times or increase the time to reach equilibrium. If this occurs with an acetonitrile-based solution, using methanol will allow using a smaller ratio, such as 10:1, which may make preparation easier. 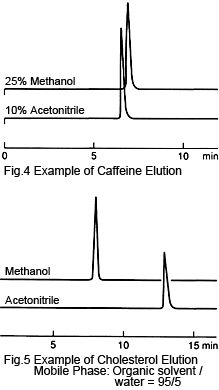 5. Separation (Elution) Selectivity- Differs for Each

Separation selectivity differs for acetonitrile and methanol. The example in Figure 6 shows the elution order of phenol and benzoic acid is reversed. (However, for high ratios of water, phenol is eluted first even for acetonitrile-based solutions.) This is presumably due to differences in the chemical properties of the organic solvent molecules. (Methanol and ethanol are protic, but acetonitrile and tetrahydrofuran are aprotic.) Consequently, if acetonitrile does not provide adequate separation selectivity, try methanol.

6. Peak Shape - Sometimes There Are Differences

For compounds such as salicylic acid (phenol with carboxyl or methoxy group in the ortho position), acetonitrile can cause significant tailing, which could be suppressed by using methanol. This is probably caused by differences in the way the mobile phases relate to the mutual interaction (adsorption) between the silica surfaces and target components, due to the chemical properties of the organic solvent molecules.
Also, polymer-based reversed-phase columns generally tend to result in broader peaks than silica-based columns. This is particularly common for aromatic compounds in polystyrene columns. This is especially noticeable when using methanol-based mobile phases, whereas it is not very noticeable for acetonitrile-based mobile phases. Consequently, the latter is recommended for polymer reversed phase columns. The reason is presumably because of an affinity of organic solvents for gels, which causes the pore structure to change.

The following discusses preparing solvent mixtures ahead of time, in a mobile phase bottle (isocratic), instead of inside the LC system.
When methanol is mixed with water, it releases heat, which tends to facilitate releasing any extraneous dissolved air as bubbles (facilitates degassing). In contrast, acetonitrile cools the temperature by absorbing heat, so air bubbles are generated later, as it gradually returns to room temperature. Consequently, more care is required with respect to degassing. (Refer to LCtalk Special Issue 5 regarding heated stirring, membrane degassers, helium purging, and so on). 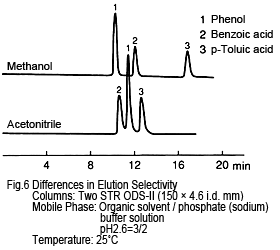 The organic solvents most commonly used for mobile phases in reverse chromatography, acetonitrile and methanol, were compared. In general, using LC grade acetonitrile is the safest choice. If selectivity or peak shape is poor, try LC grade methanol, but it can also be effective to set analytical conditions by carefully considering the properties of each solvent.