HPLC analysis is often plagued by the appearance of peaks of unknown origin (ghost peaks). This is especially troublesome during impurity testing of pharmaceuticals. There are a variety of factors that can cause ghost peaking, but one of the less noticed causes is the presence of dissolved air in the sample solution. This page discusses this in the context of reversed phase separation and UV detection. 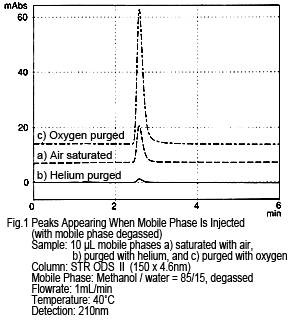 Next, let's consider the size of such peaks. Figure 3 shows a comparison of spectra from air-saturated (no degassing) methanol and degassed methanol. Degassing the methanol reduces absorption1). The difference in absorption varies depending on the wavelength; absorption at 210 nm is over 300 mAU and at 254 nm is about 10 mAU. These values can be used to perform a simple calculation of the peak height after injecting air-saturated methanol to the degassed methanol. When 10 µL is injected at a flowrate of 1 mL/min, assuming a triangular peak with a base 0.4 minutes wide, the peak height at 210 nm would be over 15 mAU and about 0.5 mAU at 254 nm. For shorter wavelengths, this results in rather large peaks.
What about other solvents? Figure 4 shows the difference spectra for various solvents, calculated by subtracting the degassed solvent spectra from air-saturated solvent spectra. For each solvent, absorption increases due to dissolved air, but the dissolved air has a smaller effect on water and acetonitrile and a larger effect on hexane, methanol, and THF.
The amount of change in absorption does not match the level of dissolved oxygen in each solvent. For example, hexane has a much higher oxygen solubility than methanol2), but the change in absorption is small. Therefore, the reason for the absorption is not due to absorption by oxygen alone. Rather, presumably it is a result of an interaction between the oxygen and solvent2).

It may be tempting to assume that peaks presumably caused by dissolved oxygen would elute earlier. However, just as with the retention behavior of sample components, decreasing the ratio of organic solvent delays the elution. Figure 5 shows an example of a methanol/water-based solution, where the mobile phase and sample solvent have the same solvent composition. As shown, these peaks might not separate from target components. This same tendency is shown for acetonitrile/water-based solutions or if the water is substituted with a buffer solution.
Note that the peak size decreases as the methanol ratio is reduced.

4. How to Check Peaks Assumed to Be Caused by Dissolved Air

When using a gas-liquid separation membrane degassing unit, if a peak occurs that you suspect is from dissolved air, use the following method to check the peak. If any of the following apply, the probability is very high. 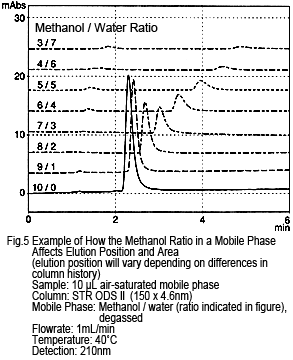 Though it is difficult to completely eliminate peaks caused by dissolved air, let's consider the following methods to reduce their size (assuming the original analytical conditions use a methanol-based mobile phase).

These measures should really be considered during method development.


As described above, even if some ghost peaks are judged to be caused by dissolved air, it may be difficult to resolve the problem easily. Nevertheless, it is extremely important for those developing and managing analytical conditions to understand the causes.

Even given the same analytical conditions, if a refractometer is being used as the detector, it can cause negative peaks. This is because, when the mobile phase is degassed online, the refractive index is higher than when not degassed.1)Not only oxygen, but nitrogen is involved as well. This will be discussed at a future time, as time allows.