In the first step for analysis, we will not use a column. The method of analyzing samples by injecting them into flowing solvent (mobile phase) is called flow injection analysis (FIA).

Since target compounds cannot be analyzed unless they are ionized, first investigate:
(1) Will target compounds be ionized?
(2) Which detection mode is appropriate, positive or negative ion mode?

If a Shimadzu LCMS-2010EV(A) system is used, positive and negative ions can be measured simultaneously by using the Multi-Sequence Mode, and good analytical results can be obtained without fussing over setting ionization parameters, such as DCL voltage and Q-array DC/RF voltage, by using the C (constant) mode or S (scan) mode, which use optimized values according to the ion mass. FIA parameters are indicated in Table 1.

In FIA, the sample solvent can have a large influence on the ionization efficiency. Therefore, sample preparation is extremely important. If necessary, an acid or base is added to adjust pH or a dissolving assistant to ensure complete dissolution. It can easily be determined from total ion chromatograms (TIC) whether ions are generated, but because separation is not performed for FIA, it is necessary to confirm that the ions are from the target compounds. Since lower sample concentration makes this determination more difficult, it is probably better to experiment with sample concentrations in the tens to hundreds of ppm until proficient. Figure 1 shows the FIA results for a certain compound. It shows the TIC for each ionization and a chromatogram for the mass number with the highest ion intensity. It is easy to determine from this data that some sort of ions are observed. 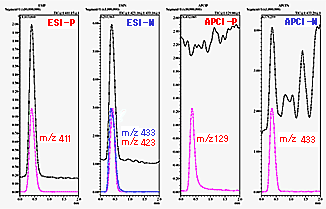 Cases Where Only Positive Ions Can Be Detected

These are compounds that most likely can be successfully analyzed using the first-choice mobile phase.

Cases Where Both Positive and Negative Ions Can Be Detected

Cases Where Only Negative Ions Can Be Detected

In these cases, the first-choice mobile phase might not be appropriate. Prepare to change over from an aqueous formic acid solution to a 5 mmol/L aqueous ammonium formate solution.

Cases Where No Ions are Detected

Try using not only electrospray ionization (ESI), but also atmospheric pressure chemical ionization (APCI), atmospheric pressure photoionization (APPI), or other ionization methods. In the case of ESI, try varying the pH of the sample solution by adding an acid or base. In the case of ESI or APCI, try adding ammonium ions. FIA generally provides nicely-shaped peaks. If peak tailing occurs, it is probably due to poor dissolution of target compounds in the mobile phase. If so, measures such as adding a dissolving assistant to the mobile phase may be required, though it will decrease sensitivity somewhat.

The most important point of this experiment is to confirm that ions generated from target compounds are observed, rather than that merely any sort of ions are observed. Therefore, it is necessary to attribute observed ions to specific compounds. Fundamentally, in the attribution process, assuming that positive ions are protonated molecules [M+H]+ and negative ions are deprotonated molecules [M-H]-, it is verified whether they are consistent with the molecular mass of target compounds. However, many other types of ions are observed as well (Figure 1). Table 2 summaries the types of molecular ions frequently observed from ESI. For positive ions, the type of ions observed varies depending on the force relationship between target compounds and neutral molecules to scramble for protons (proton affinity). The type of ions that appear provides a glimpse of the compound's properties. For example, ammonium ion adduct type molecules indicate that the proton affinity of the target compound is weaker than the ammonia. Consequently, this means that if ammonium ion adduct type molecules appear, then the target compound must be less basic than the ammonia. In addition, even in the negative ion mode, there are many compounds that ionize as chlorine ion adduct molecules [M+Cl]- or [M+HCOO]- by borrowing strength from basic ions or acids added to the mobile phase, even if they have no acidic functional groups. Attributing ion types focuses on these differences in the mass of ions.

What, then, is the molecular mass of the certain compound in Figure 1? With a little practice, one can determine that the molecular mass is 388 based on observation of positive ions of sodium adduct ion molecules and negative ions of chlorine and formic acid ion adduct molecules.
(Note: In Figure 1, [ESI-P] m/z 411 is 388 + 23, which is a sodium adduct ion, and [ESI-N] m/z 423 is 388 + 35, which is a chlorine adduct ion.)

If it can be determined that observed ions are generated from a target compound, then that achieves the first phase of LC-MS analysis. Not performing this first phase can have terrible consequences. Since the analysis only takes a few minutes, we recommend that it be performed without fail. (Mu)


Supplemental Explanation: Based on past analytical experience and other factors, if proper detection of target compounds is expected, sometimes we do not perform flow injection analysis and verify whether gradient conditions with mobile phases A and B can be used to separate samples. In that case, perform flow injection analysis if there is a problem with ionization.