For some organic solvents, if the dissolved oxygen level is high, absorbance increases significantly. Stated conversely, it means degassing can lower the level of the background caused by absorption of the mobile phase. For example, if methanol saturated with dissolved air (where, oxygen has a partial pressure of 0.2 atmospheric pressure) is used as the mobile phase and measured at 210 nm, the background can be reduced by over 0.32 AU by degassing with helium purging (Figure 16). Consequently, if the dissolved oxygen level is high, it goes without saying that the noise level is high, but if mobile phase temperature changes or other factors can change the dissolved oxygen level, baseline fluctuations increase as well.  If measured with a full-scale range of 0.01 AU, a 1 % change in dissolved oxygen results in a baseline change of more than 30 % full scale.   Gradient mixing with methanol that has a high dissolved oxygen level can increase the baseline slope (Figure 17) and peak integration problems may occur.
This effect of dissolved oxygen is significant in the short-wavelength region, but has been confirmed to extend up to relatively long wavelengths for tetrahydrofuran (THF). The relative effect at 254 nm is expressed by the inequality THF > methanol > acetonitrile > water. In contrast, this effect does not appear for acetonitrile (LC grade) even at short wavelengths. Therefore, the increase in absorbance seems to be not due to absorption by oxygen itself, but some sort of unique interaction between oxygen and the solvent or its impurities.
As a rule, LC-grade acetonitrile should be used for high-sensitivity analysis in the short UV wavelength region. However, if methanol or THF must be used due to separation selectivity, degas the solution to reduce the level of dissolved oxygen and also keep it at a constant level. 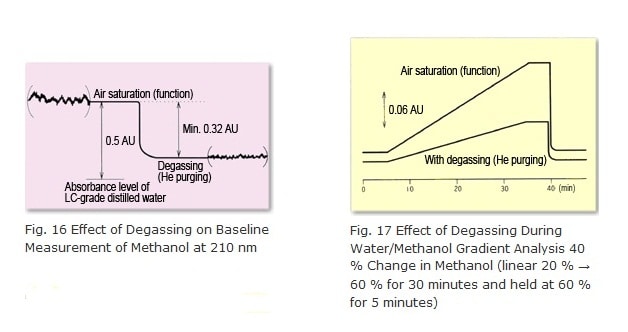