When analyzing a sample by a Fourier transform infrared (FTIR) spectrophotometer, the measurement mode is normally set to transmittance or absorbance. However, unlike a dispersive spectrophotometer, the FTIR instrument does not measure these spectra directly.
In FTIR analyses, Infrared light from the light source passes through a Michelson interferometer along the optical path.
The Michelson interferometer comprises a beam splitter, moving mirror, and fixed mirror. The light beam split into two by the beam splitter is reflected from the moving mirror and fixed mirror, before being recombined by the beam splitter.
As the moving mirror makes reciprocating movements, the optical path difference to the fixed mirror changes, such that the phase difference changes with time. The light beams are recombined in the Michelson interferometer to produce interference light. The intensity of the interference light is recorded in an interferogram, with the optical path difference recorded along the horizontal axis.
The data directly acquired by the FTIR instrument is in the form of an interferogram of the infrared light that passed through the sample. Looking at the interferogram does not give an understanding of the sample characteristics. To get a normal spectrum with the wavenumber (wavelength) along the horizontal axis requires Fourier transform by a computer. This is the major characteristic of the FTIR instrument and differentiates it from a dispersive spectrophotometer, which measures spectra directly.

Where,S(ν) is the infrared light intensity at wavenumber ν.
S(ν) can be calculated by Fourier transform.
The data obtained is a power spectrum. The ratio between the background and the sample power spectrum produces a spectrum expressed as transmittance.

As described above, a transmittance spectrum (or a spectrum converted to an absorbance spectrum) is obtained when Fourier transform is applied to the measured interferogram.
However, the description above applies to a theoretical situation. Actual measurements differ from the ideal state.
In particular, the integration range for the expression above is from 0 to infinity. This supports an infinite range of movement of the moving mirror. However, such a movement is impossible. The moving mirror reciprocates through a finite distance, such that in practice this integration has to be cut off in a finite range.
For example, if the integration range is restricted to [-L, L], such that the contributions outside this range are not calculated, the Fourier transform expression can be written as

Ripples are formed around a large peak.

Incorporatingw(ν) into spectrumS(ν) results in ripples likeW(x) around a peak in the spectrum. For a simple box-car waveform such asW(x) above, the largest ripple after the peak is the adjacent valley, which has a depth of approximately 21 % peak height. If the ripples are large, the spectrum obtained contains irregularities analogous to peaks, and it will differ from the actual spectrum.
However, if we use a triangular waveform instead of suddenly discontinuing the calculation in the integration range, we get

If this is used instead ofW(x) above, the Fourier transform imagea(ν) becomes

At a glance, it is apparent that the ripples are smaller.
This is because the integration is not suddenly discontinued at the limit. Rather, the contributions decrease at a constant rate as the limit is approached.
However, the central peak is also lower and somewhat wider. This appears as reduced resolution in the actual spectrum.
Applying some type of function to Fourier transform integration to reduce the ripples, as in this example, is called "apodization" and the function is known as an "apodization function." It can be seen from the examples of the box-car waveform and triangular waveform that reducing the ripples implies a compromise between the resolution and peak height. Improving one makes the other worse. Therefore, the apodization function must be selected to suit the intended purpose.
The Happ-Genzel function is often used to achieve a good balance between ripple size and resolution.

Applying it to the Fourier transform image gives

The Fourier transform image shows a high central peak and well-suppressed ripples.
The Happ-Genzel function is normally used. However, in cases where good resolution is required, such as gas measurements, the box-car function is used.
The apodization functions must be separated according to the intended purpose, as shown above. 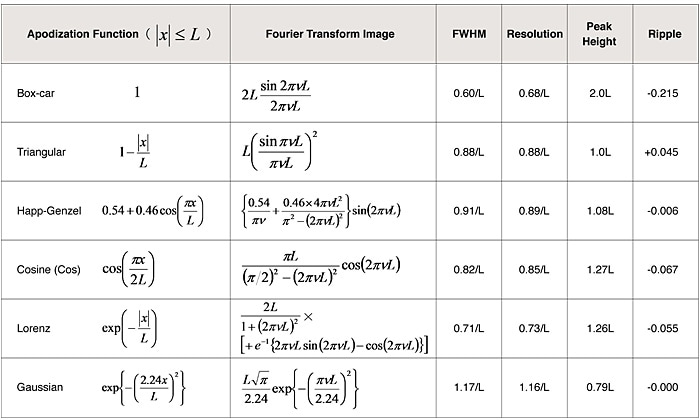