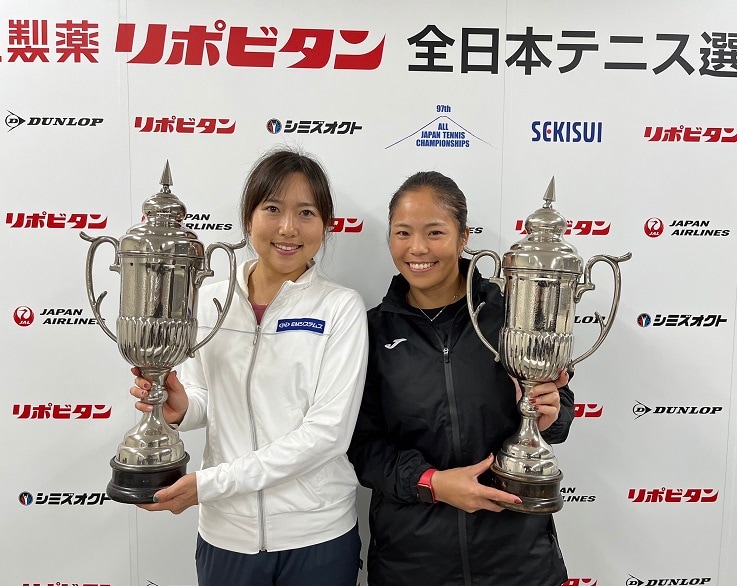 Omae won her third doubles title in the same tournament for the second year in a row!

Omae, the champion in the same event at the previous tournament, was paired with Miharu Imanishi (EM Systems) and seeded 4th. This is the same pair who won the 2016 tournament.

The three matches from the second round to the finals of this year’s tournament were very close and went down to the final set. Still, the team continued to show their competitive spirit and Omae won her third doubles trophy of the tournament.

Women’s Doubles Final and Awards Ceremony
(The game starts at about 51:00. The player in red is Omae.)

Imanishi, who was paired with Omae, played as a teammate for the SHIMADZU Breakers from April 2011 to March 2020.

Imanishi had announced that she would retire at the end of this season, and this was her last All Japan Championships. It seems that Omae had special feelings for her, as she said on her social media account, “I want to play tennis with her even for one second longer.”

Thank you for all your support. I am thrilled to win the doubles at the All Japan Tennis Championships again.

Following Miyabi Inoue’s retirement at last year’s tournament, I was also chosen to be Imanishi’s partner this year at her retirement tournament. There was a lot of pressure, but I am very happy that I was able to show what I could do and cap her career with a positive outcome.

I will still be working hard, so please continue to support me. The Video “Supporting Athletes with Science and Technology”  | SHIMADZU TODAY
Mai Hontama Qualifies for the Main Draw in a Grand Slam Competition in Singles! | SHIMADZU TODAY