In the world of synthetic fibers, product research is being actively pursued to improve performance, such that products with enhanced functionality (such as superior strength and resistance characteristics) are now being used in a variety of fields.
In particular, the automotive and aerospace fields have shown interest in the flexibility and light weight characteristics of fibers and have been increasing their applications. However, at the same time, in terms of strength, it is now necessary to determine not only static limit values, but characteristics under high-speed loading (or impact) conditions as well.
As an example of such testing, a tensile test was performed on polypropylene fiber using an HITS-T10 Hydroshot High-Speed Tensile Testing Machine, capable of tensile testing at loading rates of up to 20 m/s, with grips designed for tensile testing fibers attached.

In addition, the High-Speed Video Camera was used to observe how the sample fails at breakpoint.

Fig. 1 shows the data obtained, in terms of test force versus displacement between grips. The graph shows fine vibration due to the variability in the behavior of individual fibers, but overall it clearly shows the characteristics of the fiber in response to a tensile load, indicating a maximum test force of about 85 N, failure onset at a grip displacement of about 12 mm, and complete failure at about 15 mm.

Fig. 2 shows images from the High-Speed Video Camera used to investigate how the sample (polypropylene fiber) failed at breakpoint in the high-speed tensile test. It shows images recorded at a frame rate of 32,000 fps. These images reveal failure process progressing gradually, starting from the outside of the fiber. 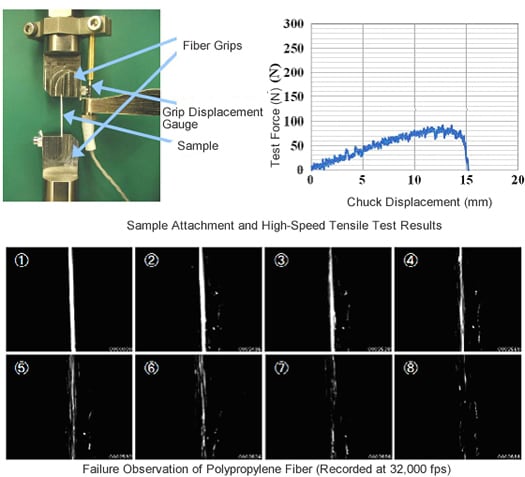 The Shimadzu HyperVision HPV-2 High-Speed Video Camera offers ultra-high-speed imaging at speeds up to one-million frames per second. It achieves 81K Pixel high resolution, regardless of the imaging rate. It provides an effective way of visualizing high-speed phenomena.