Typical methods for producing carbon nanotubes (CNTs) include arc discharge, laser ablation, and chemical vapor deposition (CVD). As each method results in by-products in the CNTs, such as amorphous carbon, carbon nanoparticles, fullerenes, and metal nanoparticles, purification is required after production. Fullerenes are eliminated by extraction as they dissolve in organic solvents. Metal impurities can be eliminated by acid treatment. Trace levels of impurities can remain if purification is inadequate. 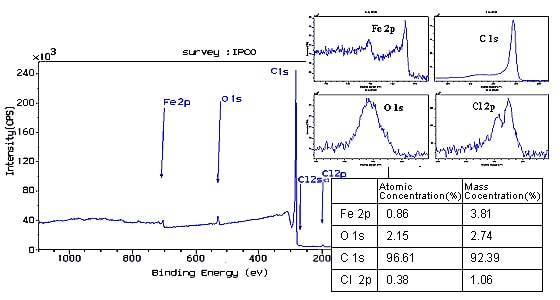 The Micro XPS instrument automates the procedures from introducing the sample to starting analysis. The analysis position can be rapidly assigned to any point on the 110 mm-diameter sample platen from a CCD camera image or realtime photoelectron image. The revolutionary, patented neutralization method produces high-resolution spectra with no damage to the sample, thereby allowing micro analysis of organic matter that was conventionally considered difficult.