● Introduction
ISO 6892 is the standard which describes the procedures for tensile testing of metals as established by the International Organization of Standards. This standard is currently undergoing revision, and the revised version is expected to be issued in 2009 – 10.
The main focus of the revision is related to the method of controlling load, in which the load at yield point or less will be determined utilizing the current stress increase rate method together with the newly proposed strain increase rate method (measured with an extensometer).
From the point of view of materials supply manufacturers, the revision means that users who have never had experience with this new control method will be required to obtain test data based on strain increase rate control. Accordingly, concern is expected to rise among existing testing machine users, consisting mainly of steel manufacturers, as to whether or not they will be able to obtain stable strain rate control with the new or replacement equipment that will be required to comply with the revised standard.

Here we used the Shimadzu Autograph AG-50kNX precision universal testing machine with the SSG-50-10H extensometer (shown in overview of Fig. 1) to perform tensile testing of an SPCC steel sheet sample according to 2 types of strain increase rate control as specified in the proposed ISO 6892 revision, in order to verify the results and load rate control accuracy.
The 2 rates consisted of 0.00007 /s and 0.00025 /s load rate until 2% strain, the latter being recommended in this standard. The rate tolerance (accuracy) is ±20% according to the revised standard. In addition, the test piece shape conformed to JIS Z2201 No. 5 (width: 25 mm, gauge length: 50 mm, thickness: 1mm).

● Testing Apparatus and Test Results
Using the 2 increase rate of strain values of 0.00025 /s (recommended in the standard) and 0.00007 /s prescribed in the proposed ISO 6892 revision, increase rate of strain control was conducted up to 2% strain with the extensometer, and after removing the extensometer, testing was conducted to the break point at the predicted strain rate (cross head speed) of 0.0067 /s.
Fig. 2 shows the overlaid test result (stress – strain curves). The origin point is shifted slightly for easier viewing. (After rising, the point at which the stress discontinues corresponds to the point at which the rate is switched.)
These results clearly indicate that smooth load control is achieved.


Next, the measured values were numerically differentiated to calculate the rates, which were then analyzed with respect to time to evaluate the strain rate stability. 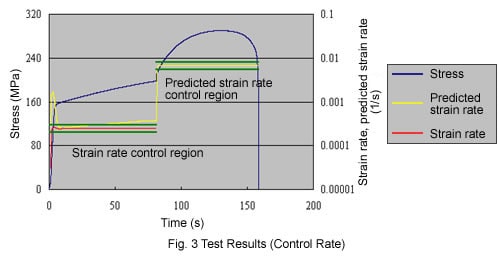 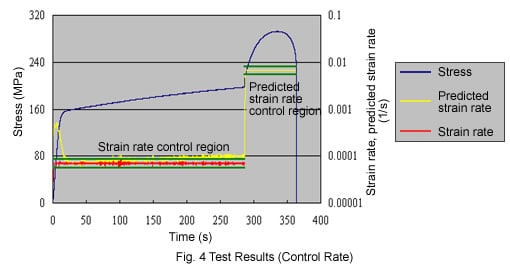 The above results clearly indicate that the Shimadzu Autograph AG-50kNX precision universal testing machine, easily and with high precision, and further, without the need for gain adjustment, fully satisfies the ±20% tolerance with respect to the increase rate of strain control value specified in the proposed ISO 6892 revision for the strain rate control test.