A variety of analytical methods are utilized to measure reaction products in research into artificial photosynthesis, in which high-energy substances are manufactured using photo catalysts and solar energy. These methods include GC, HPLC, and absorption photometry. Experiments utilizing isotope-labeled samples are an effective way of confirming and clarifying reaction mechanisms. Mass spectrometers demonstrate their worth in such measurements. This Data Sheet presents an example of the use of GC-MS to measure carbon monoxide, methanol, formaldehyde, formic acid, and other substances generated in carbon dioxide photo catalytic reduction under a methanol environment.

Fig. 1 shows examples of the use of GC-MS to measure carbon monoxide (molecular weight: 28), generated in a carbon dioxide reduction using a photo catalyst. Fig. 1A is the extracted ion chromatogram for CO in experiments using unlabeled CO2 (methanol solvent). Fig. 1B is the extracted ion chromatogram for CO in experiments using 13CO2 (methanol solvent).
In Fig. 1B, a peak can be confirmed at m/z 29 (13CO). However, a peak is likewise confirmed at m/z 28 (CO). From this, it is evident that in this reaction, the carbon monoxide generated from the carbon dioxide is part of the total carbon monoxide. The reaction mechanism for the photo catalytic reaction can be inferred by measuring the formaldehyde, a reaction product of 13CH3OH, and the formic acid, a reaction product of 13CO2 in a similar manner. 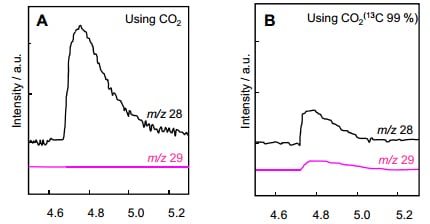 Note:
This data was provided by Professor Osamu Ishitani of the Department of Chemistry, Graduate School of Science and Engineering, Tokyo Institute of Technology.
Sekizawa,K; Maeda,K; Domen,K; Koike,K; Ishitani,O. J.Am.Chem.Soc, 2013, 135, 4596.
Artificial Z-Scheme Constructed with a Supramolecular Metal Complex and Semiconductor for the Photocatalytic Reduction of CO2

(2) Analysis of Methanol, Formaldehyde, and Formic Acid in Solution

Fig. 2 shows a sample measurement in which a mixed aqueous solution of methanol, formaldehyde, and formic acid was introduced directly to the GC-MS. A polar column was used for the separation, enabling these three components to be measured in the same analytical run. With these conditions, the 13C labeled compound and the non-labeled compound have the same retention time. The mass spectra for each of the 13C labeled components is shown in Fig. 3. With the 13C labeled samples, since the mass spectra obtained is only shifted by an m/z of 1, the existence of isotopes can be confirmed from the presence of the molecular ion. 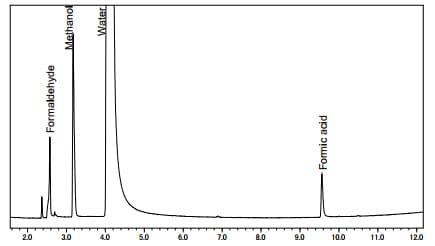 The GCMS-QP2020 is our most advanced gas chromatograph mass spectrometer. Descended from the GCMS-QP2020 Plus, it features best-in-class scan speed and sensitivity.
Lab productivity and sample throughput are automatically increased. Ecology mode saves power and carrier gas consumption allowing for a lower cost of ownership and less environmental stress.