Ginkgo leaf extract (ginkgo biloba extract), which contains active ingredients extracted from ginkgo biloba leaves, is reported to be effective in improving cerebral and peripheral blood circulation deficiencies. It is used in Japan and the United States in the form of a dietary supplement, and in Germany, France, and other European countries as a prescription medication. However, alkylphenols which are present in the ginkgolic acids contained in ginkgo leaves are known to cause allergic reactions. For this reason, the United States Pharmacopeia (USP) has established an upper limit for ginkgolic acid content in ginkgo biloba extract. Here we introduce an example of analysis of gingkolic acids contained in ginkgo biloba leaves. 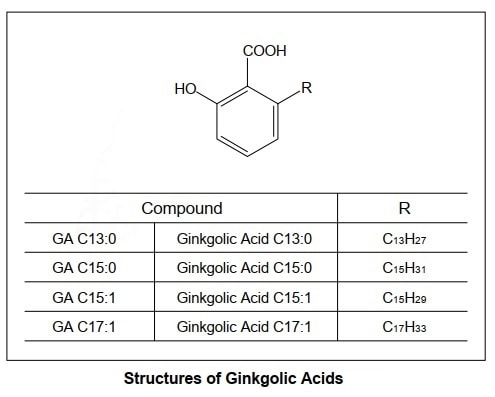