Chondroitin sulfate, which is contained in a lot of tissues such as cells and cartilages is a kind of mucopolysaccharides. Chondroitin sulfate is often included in eye drops and supplements as sodium chondroitin sulfate (hereinafter called as SCS) due to its positive effect to corneal protection and improvement of joint pain. SCS cannot be detected by UV-VIS spectrophotometric (UV) detector, which is often used in HPLC because SCS has very limited UV absorption. Therefore, refractive index detector (hereinafter called as RID) or evaporative light scattering detector (hereinafter called as ELSD) is used to detect SCS. ELSD is a highly versatile detector because it can be used to detect almost all compounds except volatile ones. It provides reduced analysis time and improved sensitivity compared to those of analyses in which RID is used due to applicability to gradient elution. Therefore, ELSD is used in analyses of various substances such as sugars and lipids.
Here, SCS in eye drops was analyzed by NexeraTM series with ELSD-LT III as a detector. 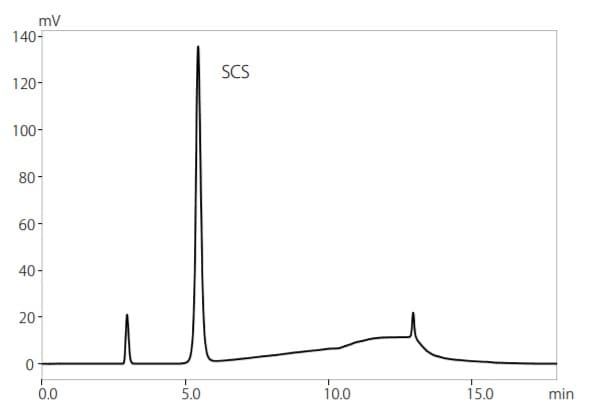