The Beginning of Shimadzu Balances

Shimadzu Corporation's roots date back to its founding in 1875 when it started out as a manufacturer of precision equipment. Its first offering in the area of balances was in 1918 when it started sales of physical balances comprising pans hung from both ends of a beam, the basic type of balance.

From then on, it expanded the models it manufactured, and developed a succession of balances including chemical balances, followed by microbalances and large-capacity balances.

With chemical balances in the early years, the sample was placed on a pan at one end of a beam, and very small weights were placed with the utmost care on the pan at the other end with tweezers. When the balance was in-balance, its reading was taken. At this time, however, the amount of swinging to the left and right of the beam had to be confirmed visually several times, and the rest point had to be calculated by the vibration method. Even experienced technicians took several minutes to measure a single sample, and mass measurement was very precise work that could be achieved only by experience and a lot of effort.

After this, a succession of various measures, such as an air damper to suppress swinging and a device (NR model) for placing and removing very small weights, were devised to make balances easier to use. 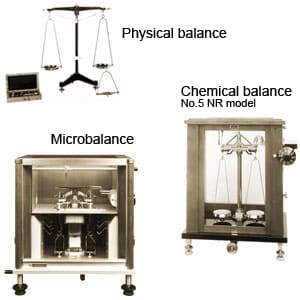