Birth of the Revolutionary New Type of Balance "Direct-Reading Balance"

In 1950, the introduction of a new type of balance — the direct-reading balance — revolutionized the market. The appearance of this new system named by Shimadzu, which has been adopted as standard equipment even in Japan

Measurement Act, proved to be an epoch-making step in the development of balances in Japan.
Measurement on conventional chemical balances used to be performed by placing the sample on one end of the beam and weights on the other end with tweezers. This new balance, however, was completely different. The weight of the sample could be learned simply by operating dials and reading the number of the dial and the projected scale. Sold at the time under the catchphrase "Measurement times of just under a minute!," it allowed measurements that used to take several minutes to be cut to under a third.

Since it had a price tag at the time (around 1957) of about three times that of conventional chemical balances, it was used mainly by professors and assistants at universities or other institutions. It was a super high-class product that typical university students hardly had the chance to touch and operate. Yet, it proved so convenient that, once it was used, technicians never wanted to go back to old-style chemical balances, which led to the increasing popularity of direct-reading balances. 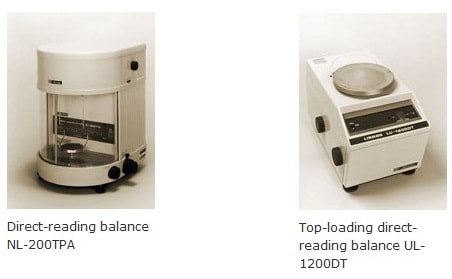 From then on, Shimadzu developed other models including an all-digital-digit display model, model incorporating a tare delete function, direct-reading microbalance, top-loading balance, and mechanical type automatic balance. Until recently, direct-reading balances had been used by many users as standard balances affectionately referred to under its brand name "LIBROR" coined from Libra, the seventh sign of the Zodiac.