The analysis of powder samples is a typical X-ray fluorescence spectrometry application. The samples can be press-formed or loose in the sample cell.
The following shows an example of the analysis of a cement standard substance using Na–U qualitative/quantitative analysis, which is the standard method for powder analysis. Accurate quantitation was achieved without using standard samples. Performing measurements in a vacuum achieved sensitive measurements of light elements.

To measure a liquid sample, simply add it to a sample cell with film on the bottom. This method is effective for the detection and quantitation of additive components and worn metals in aqueous solutions, organic solvents, or oils.
As shown below, the system achieves adequate detection of heavy elements in waste oil at ppm levels.

EDX permits non-destructive elemental testing, making it effective for the analysis of foreign matter adhering to or mixed in with foods, drugs, or products. Using the sample observation camera and collimators makes it easy to identify trace foreign matter.
The 1 mm irradiation diameter is effective at reducing the effects of peripheral material, resulting in accurate quantitative matching. In the example, the material was identified as SUS316. 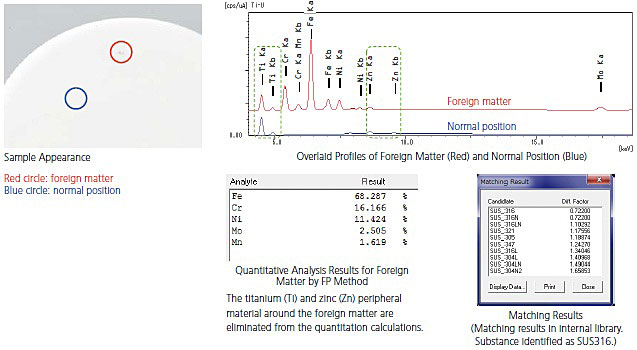 EDX is used for the analysis of elements contained in foods and biological samples. It is effective for process control when adding elements to foods, evaluating the poor growth of crops, and identifying the region or origin.
The new background FP function achieves similar quantitation results with low sample volumes as from adequate sample volumes. It is effective in research applications when only small samples are available and in eliminating discrepancies due to differences in sample pretreatment by operators.

The thin-film FP method can be used to measure the thickness of multilayer films or simultaneously quantify the thickness and composition of films. The following shows an example of quantifying the 1.8 μm thickness of a plating film and the concentration of its principal components Ni and P and trace quantities of Pb that were detected.

EDX performs measurement of plating thickness without any standard sample by thin-film FP method. However, there was a problem with quantitative error becomes bigger in irregular shaped sample because the thin-film FP method assumes quantitative calculation method for the flat measuring surface condition. The new features of background FP method can perform measurement of plating thickness with less error in irregular shaped sample such as a shaft portion of the screw. The thickness measurement example of galvanized screws is shown below. 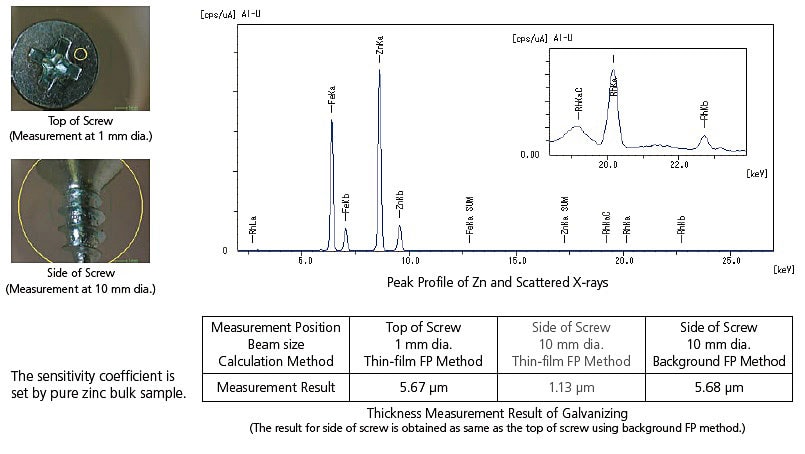 Pulverizing Samples
Pulverize samples with coarse particle sizes, or samples subject to effects of non-uniformity of mineral particles on the analysis surface.

Glass Bead Method
The glass bead method provides highly accurate analysis of oxide powders, such as rock. The sample is glassified using a flux such as Li2B4O7. 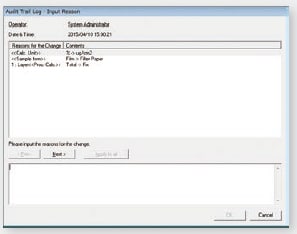 All analytical data including data obtained from other analytical instruments is managed on a database on the server computer, allowing data to be loaded and managed on any computers on the network.

A six-point calibration curve was created by adding platinum (Pt) standard to cellulose powder in the range from 0 to 20 ppm. The results in the table below show a good standard deviation (RMS) and linearity coefficient were achieved using only 100 mg of sample and a 20 minute analysis time. The results indicate that the system can perform analysis with high accuracy even with limited sample. 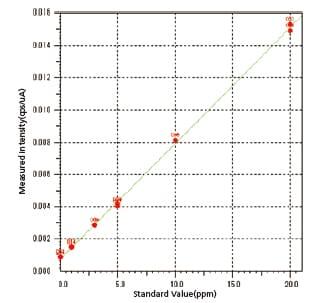 30 ppm platinum (Pt) peak is clearly detected as well as a 5 ppm arsenic (As) peak.

Quantitative Analysis of Antimony (Sb) in Plastics by EDXRF