Impurity intake restricted to 1.5 µg/day max. when taking a drug over a long period (12 months or more)

The Co-Sense for Impurities system increases the sensitivity 10 to 20 times by performing online trap concentration of the impurity fractions obtained by 1-D separation, and subsequently performing 2-D separation.
Compared to MS, it offers the advantages of (1) requiring no special analytical skill and (2) low initial capital costs to create the system, since an existing LC system can be expanded. The graphical user interface of the dedicated control software makes operation easy.

Quantification using trap concentration with an absorbance detector can fully exploit various separation conditions, such as phosphate buffer solution and ion-pair reagents, which inhibit MS measurements, to achieve greater separation of components and ultrahigh-sensitivity quantification of ultra-trace impurities. It is recommended in cases where sensitivity or separation is problematic, such as when the sample solution is excessively diluted or when an impurity component is mistaken for a target compound. 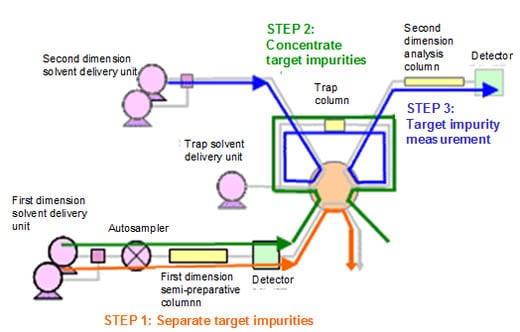 Using a 1-D and 2-D column with different retention characteristics, or using different mobile phase compositions, permits reliable separation and highly accurate quantitation of trace impurities in cases where adequate separation of the main components from impurities is difficult using 1-D separation only.

A drug was spiked to 0.0008 % with caffeine as a pseudo-impurity, and then analyzed. Before concentration, another impurity in the drug was overlaid on the caffeine peak. Concentration enhanced sensitivity and optimization of the separation conditions, permitting high-sensitivity, high-resolution detection. (Drug injected volume: 1.5 mL at 0.5 mg/mL concentration).

Significant knowledge and experience are generally required to set the analytical conditions and clean the flow lines of a 2-D separation system. However, the graphical user interface of the dedicated control software is so clear that anyone can operate the Co-Sense for Impurities System.