Q2-1: What kinds of samples can be observed using SPMs?

SPMs are best suited to observe hard, smooth samples. For such samples, good images can be obtained by simply placing the sample horizontally in the sample holder. Samples that require special consideration include those with surfaces that change quickly, unsecured samples, samples with a secured base but with a loose surface, surfaces that start lifting up over time, and surfaces with a large aspect ratio (ratio between the width and height of the cross section structure, such as the bottom of a narrow deep groove). It may not be possible to observe such samples, or they may require special care with respect to observation and interpretation.
Furthermore, the available performance of SPM systems (resolution, reproducibility, and the ability to obtain non-contour signals) varies significantly depending on a number of factors, such as the sample origin, the surface treatment method, the securement method, the atmosphere near the sample, the type of cantilever used, and individual differences between cantilevers. In particular, significant expertise is required to determine how to properly secure powders and other especially small samples, how to split samples to observe their cross section, and how to prepare biological and other soft samples.
It would be an overstatement to claim that anything can be observed with a SPM. Therefore, in research it is important to sufficiently understand the operating principles and characteristics of the SPM, and to prepare samples appropriately for the instrument (including the hardness, securement method, target area exposure method, and proportion of target material), so as to fully utilize its performance capabilities. These considerations are the same as for other analytical instruments.

Q2-2: What size of samples can be observed using SPMs?

Models for small samples are generally designed to move the sample with respect to the probe. In such systems, any sample can be placed in the sample holder (usually about 10 mm to 20 mm across) as long as it does not protrude from the holder. Typically, samples from about a few mm to 10 mm in height can be placed in the holder. The figure below shows the actual loading of a sample holder on a SPM for small samples. One concern about this type of SPM is that the edges of the sample holder are often unobservable because the image is obtained at the probe position on the tip of the cantilever. Consequently, it is important to position the area of interest near the center of the holder. Small samples, powders, or biological samples are secured to a substrate, such as glass, mica, or a silicon wafer. It is essential that the surface being observed is roughly horizontal. 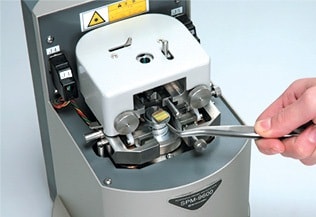 Placing a Sample in a Shimadzu SPM, with the
Sample Holder (15-mm Diameter) Held by Tweezers

Q2-3: What is the approximate observable area and magnification range of the SPM?

The observable range is determined by the operating range of the scanner that scans the sample or cantilever in the XY plane. On commercial SPM systems, the scanner is generally replaceable. Therefore, the scan range (i.e. observable range) varies depending on the scanner used. (The Shimadzu SPM-9700 has four types of scanners available, which includes optional scanners.) The maximum scan range of the most typical scanner is about 30 µm x 30 µm. In other words, the horizontal observable field (X,Y) is a 30 µm square area. In contrast, the movement range in the vertical (Z) direction (height) is only about 5 µm.
If a maximum observable field is required, a large scanner is available for scanning large areas with maximum (X,Y) values over 100 µm. The maximum value in the vertical (height) Z direction is usually about 10 µm to 15 µm. However, because the height of the probe portion on the cantilever tip is typically a few microns, and the probe is progressively thicker towards its base, it is not suited to probing holes deeper than a few microns. For example, the probe cannot reach the bottom of narrow grooves or holes with a large surface aspect ratio (ratio of width to height of the sample cross section). Therefore, care is required regarding the appearance of artifacts. Realistically, however, the observable range in the vertical direction is limited to a few microns.