In this volume, we will describe the monochromator, an important part of the spectrophotometer that was explained in UV TALK LETTER Vol. 2 "The Structure of a Spectrophotometer".

Light containing various wavelengths can be broken down according to the wavelength. White light (containing many wavelengths) entering the monochromator is extracted as green (540 nm), red (650 nm), or some other monochromatic (single-wavelength) light. The operating principle can be explained by an experiment using a prism to break down sunlight, as shown in Fig. 2. A slit can be inserted in the rainbow to extract monochromatic light. Fixing the slit and rotating the prism rotates the direction of the rainbow such that the color of the extracted monochromatic light changes.

Table 1 Comparison of Prism and Grating
(✓ : advantageous for spectrophotometer)

The diffraction gratings we study at high school are often a row of slits, as shown in Fig. 4. However, the reflective blazed diffraction grating has a sawtooth cross-section, as shown in Fig. 5. As light that passed through an adequately fine slit is diffracted, light reflected from an adequately fine sawtooth surface is also diffracted. There are 500 to 2000 serrations per millimeter.

The sawtooth face of a commercially produced diffraction grating is the replica of a master grating. A thin synthetic-resin replica is stuck onto a glass sheet and coated with aluminum. The master was traditionally produced using a machine tool, but now the surface is formed by an ion beam or using laser beam photolithography. A smooth surface reduces stray light (light at unwanted wavelengths).

This is the basic expression governing diffraction gratings: mλ=d (sin i + sinθ) ...(1) Where, d is the groove (serration) spacing, i is the angle of incidence, θ is the diffraction angle (positive if the incident light and diffracted light are on the same side of the normal to the diffraction grating surface, negative if they are on opposite sides of the normal), λ is the wavelength, and m is the order (see Fig. 6). This means that when d, m, and i are fixed, light of wavelength λ is diffracted in direction θ.

Expression (1) indicates the presence of higher-order light. If d, i, and λ are fixed in expression (1), a different value of m results in a different value of θ. This indicates that light of wavelength λ diffracts in multiple angles θ, as shown in Fig. 7. These light directions are named using a combination of the m value and the + or - sign, such as +1st-order light or -1st-order light. Incidentally, the light when m=0 is known as zero-order light, for which the diffraction angle θ is equal to the angle of incidence i. This is reflected as white light, equivalent to normal specular reflection.

However, multiple diffraction gratings can be used separately to increase the efficiency over a wide range of wavelength. A different way of viewing the phenomenon of higher-order light is to say that, if d, i, and θ are fixed in expression (1), a different value of m results in a different λ. This indicates that light of multiple wavelengths θ diffracts in diffraction angles λ, as shown in Fig. 9. Therefore, a higher-order light cutout filter (short-wavelength cutout filter) is positioned after the monochromator exit slit to extract light at a specific wavelength (normally ±1st-order light).

The basic elements of a monochromator are (1) entrance slit, (2) collimating mirror (to form a parallel beam after the slit), (3) diffraction grating (dispersive element), (4) camera mirror (focuses light from the dispersive element onto the exit slit), and (5) exit slit (see Fig. 10). In Fig. 2 and Fig. 3 a simple exit slit can extract the required wavelength, as the light beam incident on the dispersive element is narrow. A camera mirror is required in an actual monochromator, however, as light is incident over the entire surface of the dispersive element. This involves refocusing the image of the (1) entrance slit at the position of (5) exit slit at the wavelength to be extracted. The other wavelengths either miss (4) camera mirror or focus at some position away from (5) exit slit. Typical mountings used in spectrophotometers are the Littrow mount, Czerny-Turner mount, and concave mounts such as the Seya-Namioka mount. As shown in Fig. 11, the Littrow mount comprises a single spherical mirror or off-axis parabolic mirror that acts as the collimating mirror and camera mirror. The Czerny-Turner mount uses two symmetrically arranged spherical mirrors as the collimating mirror and camera mirror, as shown in Fig. 10. A concave mount uses a curved diffraction grating that offers both dispersion and focusing functions to simplify the construction, as shown in Fig. 12. This mount is used to reduce the number of mirrors where extreme resolution is not required.

We described above how a monochromator acts to product monochromatic (single-wavelength) light from white light. However, while it is called single-wavelength light, it covers a certain range of wavelengths. For example, 540 nm light may extend from 539.5 to 540.5 nm. Consequently, when this light is used for measurements, information for the range from 539.5 to 540.5 nm is mixed together. This light is called "1 nmbandwidth light" and this monochromator is said to have 1 nm resolution. The smaller the wavelength band, the better the resolution. Fig. 13 shows how the resolution and bandwidth are defined as the peak width at half maximum (PWHM).


For measurements by spectrophotometer, the optimal resolution is determined by the spectral shape of the sample. A slightly larger slit width increases the light intensity reaching the detector and reduces the data noise but results in poorer resolution. Originally sharp spectral peaks broaden as shown in Fig. 14. A narrow slit width achieves a spectrum shape closer to the original spectrum. For example, if the original spectrum has a peak waveform, setting the slit width to between 1/8 and 1/10 the PWHM results in a measured peak with at least 99% the original height.1) 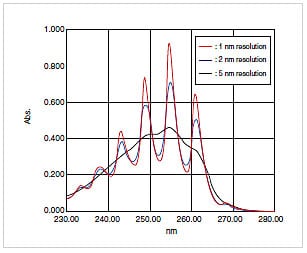 In this volume, we will describe the monochromator, an important part of the spectrophotometer that was explained in UV TALK LETTER Vol. 2 "The Structure of a Spectrophotometer".