The Structure of a Spectrophotometer

The basic measurement principle used by a spectrophotometer is relatively
simple and easy to understand. I will explain the principle as it applies to
solid samples and solution samples separately

1.The Measurement Principle Used by a Spectrophotometer

The basic measurement principle used by a spectrophotometer is relatively simple and easy to understand. I will explain the principle as it applies to solid samples and solution samples separately.

Here, ε is the sample’s absorption coefficient and L is the cell’s optical path length.
The measurement method shown in Fig. 2 eliminates the influence of reflection from the cell surface and absorption by the solvent, and ensures that only the absorption due to the sample is measured.

2.The Configuration of a Spectrophotometer

You will find from the above explanation that the indispensable elements of a spectrophotometer consist, as shown in Fig. 3, of a light source, a spectrometer, a sample compartment, and a detector. Although I said in the previous section that the sample is exposed to monochromatic light, there are instruments in which white light is passed through the sample before being passed into the spectrometer. This method is employed in high-speed photometry instruments that use array detectors. In the next sections, I will give an explanation of each element. 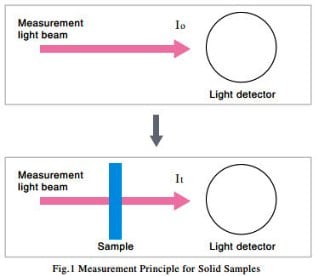 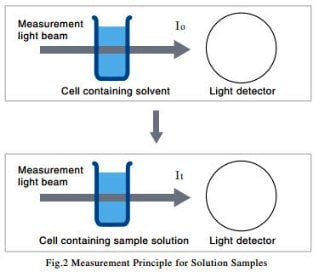 The desirable properties of a light source are as follows:
a) Brightness across a wide wavelength range
b) Stability over time
c) A long service life
d) Low cost

The principle for light emission is the same as that for a standard incandescent bulb. Electric current is supplied to a filament, the filament becomes hot, and light is emitted. The bulb in a halogen lamp is filled with inert gas and a small amount of a halogen. While the tungsten used as the filament evaporates due to the high temperature, the halide causes the tungsten to return to the filament. This helps create a bright light source with a long service life. The emission intensity distribution of a halogen lamp can be approximated using Planck’s law of radiation. Fig. 4 shows the emission intensity distribution for a temperature of 3,000 K. A halogen lamp offers superior temporal stability, a service life of approx. 2,000 hours, and a relatively low cost. It has relatively high levels of each of the properties a) to d) mentioned above.

A deuterium lamp is a discharge light source in which the bulb is filled with deuterium (D2) at a pressure of several hundred pascals. Fig. 5 shows the emission intensity distribution for a deuterium lamp. Although 400 nm is, in general, an approximate usage limit at the long wavelength end, because the degree of attenuation at this end is quite low, light of wavelengths greater than 400 nm is used. In the region beyond 400 nm, there are also large numbers of bright line spectra. Among these, the bright line spectra at 486.0 nm and 656.1 nm are particularly intense, and can be used for the wavelength calibration of spectrophotometers. The usage limit at the short wavelength end is determined by the transmittance of the window material. In Fig. 5, the graphs for cases where synthetic silica and UV glass are used for the window material are given as examples. 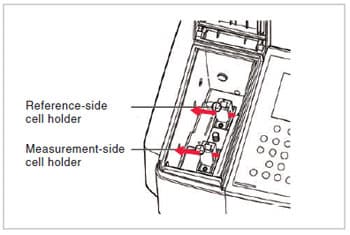 The light beams that pass through the sample compartment enter the detector, which is the last element in the spectrophotometer.

A silicon photodiode is a detector that uses the fact that the electrical properties of a detector change when it is exposed to light (i.e., the internal photoelectric effect). Solar cells, which have attracted much attention recently, use the same structure and principle as silicon photodiodes.
In comparison with photomultipliers, silicon photodiodes offer advantages such as low cost, little locality of sensitivity in the light-receiving surface, and the fact that a special power supply is not required. Even regarding sensitivity, if the light intensity is relatively large, they can obtain photometric data that is no inferior to that obtained with photomultipliers. Fig. 11 shows an example of the spectral sensitivity characteristics of a silicon photodiode.

Here, I have given an overview of the structure of UV-VIS spectrophotometers. Due to space limitations, I have only described the basics. In the future, I plan to give more detailed explanations about specialized topics. I look forward to your continued interest.

The basic measurement principle used by a spectrophotometer is relatively simple and easy to understand. I will explain the principle as it applies to solid samples and solution samples separately.