Let's think about the sample amounts required for wet measurement conducted on a laser diffraction particle size analyzer using SALD-2201 and SALD-7101 as examples.
(Practical numerical values indicated here are, basically, those obtained on the SALD-2201 and SALD-7101 and may differ on another model.)
Though sample amounts are the total of the liquid medium and particle amounts, you may be at liberty to consider that the sample amount is the liquid medium amount since the particle amount is almost within the error range in regular measurement.
When conducting measurement using a combination of a sampler and flow cell as shown in Fig. 1, the sample amount becomes 280 cc. In the case of a "beaker type sampler" that uses a beaker as the dispersing bath, the sample amount can be anywhere in the range 100 to 200 cc. This depends on the size of the beaker used. 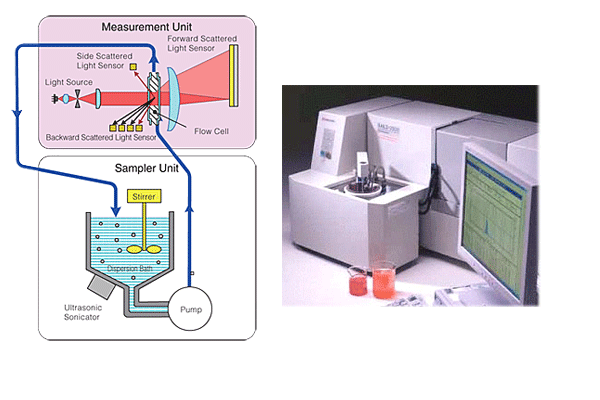 Fig. 1 Measurement Using a Combination of Sampler and Flow Cell

When a batch cell as shown in Fig. 2 is used, the sample amount is 12 cc. The sample amount can be reduced to about 8 cc by inserting a special spacer in the cell and then modifying the plate stirring mechanism. 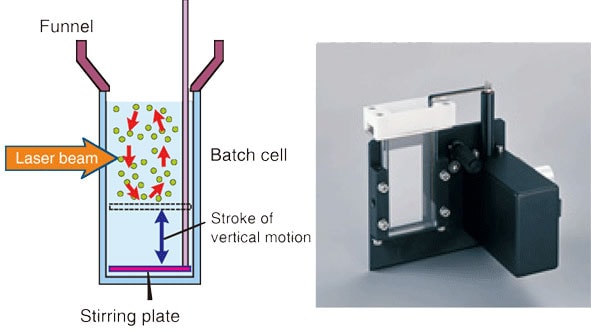 Both when a sampler-flow cell combination and a batch cell are used, the optical path length of the cell is 6 mm, and the appropriate concentration range is between several 10 ppm to 100 ppm. When an organic solvent is used as the liquid medium, it is more convenient to have less sample if you take processing and treatment later on into consideration. However, if sampling error of the particles to be measured and measurement reproducibility are taken into account when measuring samples with a broad distribution range, a larger sample amount would be better, and so a combination of a sampler and flow cell that can contain a large amount of sample must be used. Furthermore, even if the distribution width is not that broad, use of batch cell is not suitable for measuring high-density particles or large particles near the measurement upper limit due to the influence of particle precipitation, even with the sample being stirred by a plate. In this case, a combination of a sampler and flow cell that requires a sample amount of 280 cc should be used. 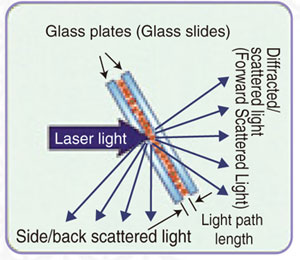 When measuring high-concentration samples as shown in Fig. 3, the particle concentration is between several to 20 % and the ratio of particles to the sample amount increases. However, both the amounts of liquid medium and particles are extremely small since trace amounts of the sample are held between glass slides and measured. 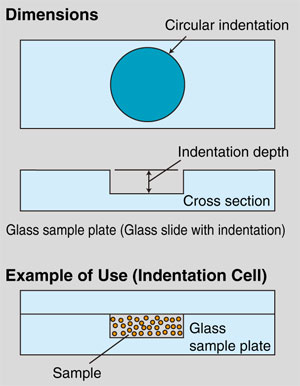 A "glass slide with indentation" can be combined with a standard glass slide to form an "indentation cell." This is effective in situations where the concentration is relative low and enclosing the sample between two standard glass slides would make the optical path length too short, and thereby make it impossible to attain sufficient diffracted/scattered light intensity.
These plates are available in six types, with indentation depths varying from 0.05 to 0.5 mm. In this configuration, the indentation depth is equivalent to the optical path length.
Table 1 shows the relationship between indentation depth and sample amount.
This indentation cell is suitable for the measurement of expensive samples that can only be used in small amounts and samples that can only be extracted in small amounts.
For example, in the development of medicines and pharmaceuticals, the drug under development is administered to laboratory rats and particles precipitated in urine as a result are measured. Yet, since measurement would be meaningless if samples extracted from many rats were mixed together to ensure a sufficient sample amount, the trace amount of sample from each single rat must be measured. This amount of sample can be measured successfully by using the indentation cell with a depth of 0.05 mm (50 µm) and sample amount of 0.015 cc.