In recent years, ion chromatography has been used in a wide range of fields, including environmental fields. Using ion chromatography on a daily basis, however, requires various considerations, just like for HPLC. In that context, this page discusses contamination that is unique to ion chromatography and how to handle and care for columns.

Ion chromatography is often used to target substances that exist in large quantities in the environment, such as chloride ions and sodium ions. Eliminating effects of contamination to perform high sensitivity analysis requires careful precautions, including handeling of samples. Water obtained from laboratory ultrapure water systems has a resistance over 18 MO and contains almost no inorganic ions. However, even when analyzing such pure water, contaminants can result in detecting about several µg/L of chloride ions and other substances.

The 1 ppb (1 µg/L) peak detected in the chromatogram is equivalent to alevel in a 1 mL sample vial.


There are two types of contamination.
1) Sample contamination
2) Carryover in sample injection unit
If results change after replacing the vial, then contamination is probably from handling samples.


If chloride ions or sodium ions are detected, contamination is probably due to human error.

If the vial has a septum type closure, be careful of the following points to prevent contamination.
1) Do not touch the septum with bare hands (especially if covered in perspiration).
2) Rinse the vial interior with ultrapure water, and then rinse with the sample solution.
If the above measures, 1 and 2, do not resolve the problem, try the following.
3) Rinse the exterior of the septum.

If samples are pretreated, be sure to prepare a method blank. This can help discover unexpected contamination from reagents being used. If unexpected peaks are detected, it is also important to evaluate how much contamination they represent.

The column used to separate ions has a packing material modified with ion-exchange groups as a stationary phase. Therefore, it has a higher hydrophilicity than an ODS column used for reversed-phase analysis, but with repeated analyses, hydrophobic substances in analytical samples accumulate in the column, which can sometimes have undesirable effects.
Some multivalent ions (ions with large valence values) exist that won't elute with the eluent (mobile phase) being used. Column instruction manuals describe rinse methods that enable eluting hydrophobic substances or multivalent ions, but rinsing does not resolve the problem in all situations.

The surfaces of ion exchange columns are hydrophilic, even if a hydrophobic substance is adsorbed, it can be rinsed with a low concentration organic solvent. Since there is a wide variety of analytical samples, which include many substances that cannot be detected using ion chromatography, the rinse solution needs to be considered carefully since it can alter the samples properties.

Beware that rinsing a column can even make the situation worse!

When to rinse a column:
1) If column pressure increases
2) If the peak shape deteriorates
These apply typically, but it always depends on the user's column control standards.
(For example, a common control standard specifies to rinse when pressure is 1.5 times higher or theoretical plates are 30 % fewer than during initial use.)

If a peak is completely split in two or forms a shoulder peak, gaps might have developed inside the column. In such cases, rinsing the column will not restore performance. Hitting the column or exposing it to sudden pressure changes or high pressures will cause it to deteriorate. 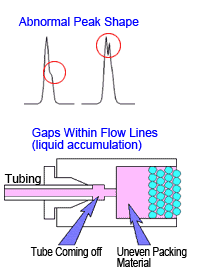 Note that pressure can temporarily increase when unknown samples are injected. The pressure limit function on the delivery pump can be used to protect columns from such pressure changes. (Ie)