Analysis of Orotic Acid in Yogurt

Orotic acid, a heteroaromatic compound discovered in whey, is also referred to as orotate, and uracil-6- carboxylic acid. In the past, it was also called vitamin B13, but since it is synthesized in vivo, it is no longer considered to be a vitamin. Orotic acid is a major precursor of the nucleic acid pyrimidine, and has been attracting attention due to its diverse physiological effects.
In Japan, it has been formulated into cosmetics and pharmaceuticals sold as "class 3 OTC drugs", namely OTC drugs with minimum risk of side effects. On January 23, 2012, the Pharmaceutical and Food Safety Bureau of the Japanese Ministry of Health, Labour and Welfare published a notification (No. 0123- 3) regarding "a partial revision of the standards for a range of pharmaceutical products", stating that orotic acid, orotic acid potassium salt, and magnesium salt were added to the list of items specified as "ingredients that are not considered as drugs unless drug efficacy is advocated". As a result, its increased use in health foods, nutritional supplements, etc. can be expected. Here, we introduce an example of analysis of orotic acid in yogurt by reversed-phase chromatography using a Shimadzu Prominence HPLC system.

Fig. 1 shows the structural formula of orotic acid. Due to its extremely high polarity, retention is minimal when using reversed-phase chromatography. Although retention may be increased by preparing the mobile phase using a buffer solution that does not contain an organic solvent, the retention time will gradually decrease when using a typical reversed-phase column. Therefore, in this analysis, we used the Hydrosphere C18 column designed by YMC Co. Ltd., featuring a deactivated silica surface and elevated hydrophilicity of the stationary phase, thereby permitting significant retention even when using a 100 % aqueous buffer solution as the mobile phase. In this application, we used only an acidic buffer solution as the mobile phase. Fig. 2 shows a chromatogram obtained from analysis of an orotic acid standard solution (10 mg/L), and Table 1 shows the analytical conditions used. 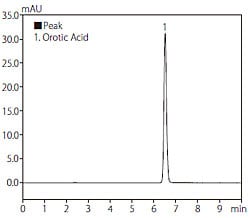 
Fig. 4 shows a chromatogram of yogurt, After filtering the sample through an ultrafiltration membrane and then diluting it ten times with water, a 10 µ L injection was made. The orotic acid content in the yogurt was found to be about 75 mg/L.

Analysis of Orotic Acid in Yogurt