The Story of Eggplant and Two Adventurers 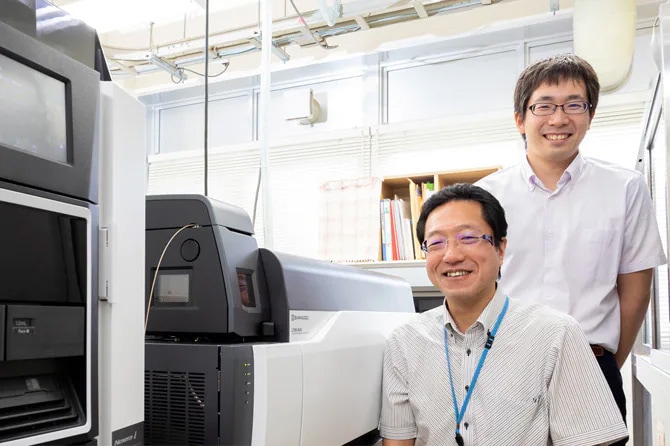 Searching for Healthy Foods to Change the World.
To Fulfill Their Mission, Two Researchers Delved Deeply into the World of Chemistry. After More Than 18 Years, Their Dreams Are About to Bear Fruit in a Massive Way.

In 2002, at the age of 32, Dr. Kozo Nakamura arrived in Nagano Prefecture. The young researcher had a dream.

“I’ve always wanted to do research and development on foods that have beneficial effects on the human body, and I feel like providence has brought me to this point. I was passionate about finding useful foods that would surprise the world.”

While Dr. Nakamura is an associate professor of Faculty in the Agriculture Department of Agricultural and Life Sciences Division of Bioscience and Biotechnology at Shinshu University, he has many colleagues who work in pharmacology. He had heard from them not only about the good side of medicine, but also the scary side. Dr. Nakamura believed that although medicine is necessary when you get sick, you also need to use the natural power of food to maintain your health before getting sick.

In a country surrounded by water, Nagano Prefecture is one of the few prefectures in Japan that is completely landlocked. Situated on a range of mountains exceeding 3,000 meters in height, Nagano’s history is one of quiet villages spread sparsely among mountain valleys. Each village has passed down its own local culinary traditions. Since Nagano is known for the longevity of its residents, Dr. Nakamura believed that the local foods may be one of the secrets that contribute to the health of its residents.

Dr. Nakamura first focused his attention on buckwheat, a famed specialty of the Shinshu region (the old name for Nagano). Buckwheat has a healthy image. Buckwheat noodles, known as soba, are lower in calories than other types of noodles, such as udon, and are also rich in rutin, which is a type of polyphenol. Dr. Nakamura was sure that he would discover something, but his research did not uncover anything beyond what was already known.

He next focused on sunkizuke, a type of traditional pickles from the Kiso region. Ordinarily, Japanese pickles are preserved in copious amounts of salt. In contrast, sunkizuke is made through fermentation, without using salt. Kiso is one of the most mountainous regions of Nagano. This unique pickle is said to have been born from a fortunate confluence of factors: the region’s lack of salt due to its distance from the sea, its high altitude, and its cold climate. Partly because he was already researching fermentation at his university, Dr. Nakamura became exceedingly interested in sunkizuke. When his research group investigated buckwheat sprouts pickled using the sunkizuke style, they obtained data that indicated unexpected effects from the supernatant liquid lying above the pickles, which were greater than those of the pickles themselves.

“When we gave the red supernatant liquid to mice, their blood pressure visibly lowered. I tried drinking it myself and, sure enough, my blood pressure went down. I suspected that I was on to something, and began a detailed analysis to identify the cause.” 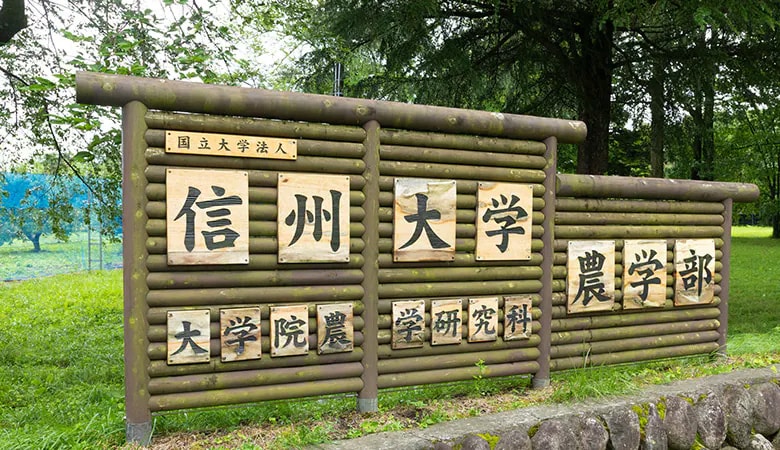 The process of separating desired components from a liquid mixture with a high degree of purity is called “isolation.”

The lab had installed an isolation system using a Shimadzu High Performance Liquid Chromatograph. Using this system, the team tried feeding mice each of the hundreds or even thousands of isolated components in turn, but were unable to find any that made a clear difference. Although they repeated the experiments using different quantities and materials, their efforts again failed to produce any clear results. Days and then months went by.

In 2008, Masahiro Koyama joined Dr. Nakamura’s Lab when he was in his first year of graduate school. Partly because he had suffered from naturally high blood pressure from a young age, Koyama found himself interested in Dr. Nakamura’s research.

“I was amazed my blood pressure actually dropped when drank the red supernatant liquid. On top of that, perhaps due to my high blood pressure, I’ve had mild insomnia ever since I can remember, always waking during the night. However, that night, I was able to sleep soundly until morning for the first time in my life.”

Koyama had a strong desire to explain his experience scientifically and give that knowledge to the world. Under Dr. Nakamura guidance, he worked to identify the functional component behind this effect. However, just as before, they were unable to identify the cause. Before he knew it, Koyama had completed his Master’s degree, and was near to completing his Ph.D.

The Treasure Chest is Filled with Eggplant!?

Then one day, Dr. Nakamura came up with a different method.

When a sample is placed in a high performance liquid chromatograph, a number of peaks appear, indicating the types and amounts of the compounds in the sample. Extracting each of these peaks is the theory behind isolation. Dr. Nakamura thought that if none of the compounds extracted using this method showed characteristic effects, then there must be a compound that did not produce a peak.

“I thought of a method of separating by time, rather than by taking each of the peaks. I narrowed down the candidates by isolating samples over short increments of time, applying them to mouse blood vessels, and checking for a dilation effect.”

After repeatedly narrowing down candidates, Dr. Nakamura isolated a compound that was a near-perfect match. The amount was tiny, at only 0.2 milligrams. After assessing the sample using another analytical system called an NMR spectrometer, he was able to make out a vague shape.

He then placed the sample in a mass spectrometer to identify the component. It was indeed a choline ester.

Acetylcholine, a typical choline ester, is a neurotransmitter and has the effect of dilating blood vessels. It also stimulates the parasympathetic nervous system and slows the heart rate. The same substance that works to lower the blood pressure in the body was present in food.

In addition to acetylcholine, the sample also contained another choline ester, lactoylcholine. Although the existence of this substance in food had been predicted, it had never been found before. This was a new discovery.

He had identified the cause; however, issues still remained.

Sunkizuke is an extremely labor-intensive food to make, and the same can be said of the liquid produced as a by-product. Distributing enough amounts as a functional food that sufficiently lowers blood pressure would be far too costly. In order for this food to help the people of the world, it also had to be economical.

Unexpectedly, the answer was right in front of them.

Eggplant contains high levels of choline esters. The concentration of choline esters is high, over 1,000 times higher than other nightshade vegetables such as tomatoes and bell peppers. Being an extremely common food in Japan, eggplant also presents no problems in terms of economics. Amazed by the size of the peak curve of the graph, the two joyfully clasped hands. 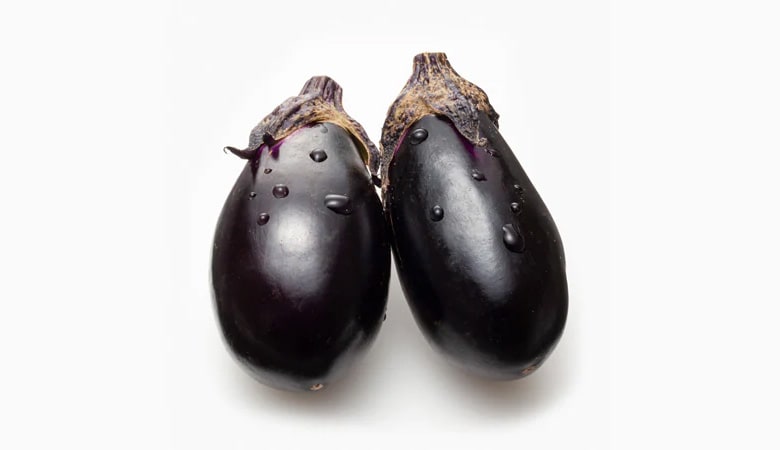 They then collected roughly 1,000 eggplants from throughout Japan and investigated the level of variation between the plants. They found that eggplants harvested in the winter and spring from warm Kochi Prefecture, located over 700 km from Nagano, had nearly twice the average amount of choline esters.

“Winter/spring eggplants take a long time between flowering and ripening. I think they must be accumulating choline esters during this time,” says Prof. Nakamura.

“Over a two-year period, we must have run the system a total of 3,000 times. Even so, it didn’t break down or malfunction for even a single day. In addition to precision and speed, the device is also durable. There is no way that our research would have produced results without this little guy,” says Prof. Nakamura, putting a hand on his second partner.

Toward a World Where Everyone Can Get Personally Optimized Nutrition

In 2017, while continuing his research as a postdoc, Dr. Koyama left the lab and founded the food-tech start-up, Wellnas. Co., Ltd.

“Dr. Nakamura wanted me to stay at the lab, but I felt that in order to make our discovery useful, we needed to get it out into society. So, I founded a company,” says Dr. Koyama. “I wanted to take something that I truly felt was good, and deliver it to the world with my own hands.”

In the spring of 2020, after three years of preparation, the company launched sales of the world’s first eggplant supplement, “Wellnas.” It was covered by the media, and in July 2020, Wellnas was registered as a Food with Function Claims (food that displays functionality) in Japan. People taking the eggplant supplement report improved blood pressure, mood, and sleep. This demonstrated the strong potential of choline esters derived from eggplant.

An adventurous duo, Dr. Kozo Nakamura and Dr. Masahiro Koyama have another dream: the realization of “custom-tailored nutritional guidance” in society.

Dr. Nakamura has this to say about their dream:

“While most people with high blood pressure need to restrict their sodium intake, for some people, consuming a slightly higher amount of sodium actually lowers their blood pressure. People’s reactions to the components in food differ. Accordingly, we plan to focus on each person’s metabolism, absorption capacity, and lifestyle, and use that information to tailor what and how much they eat. We want to create a world where anyone can easily obtain information about how to live a healthy life, including the optimal foods to eat, and how much of each to eat.”

“It seems like we will be able to find compounds in food that are effective against dementia and locomotive syndrome (aging-related mobility issues), and we want to combine this with IT to create helpful solutions for realizing health through food.”

The second chapter of their adventure has begun. 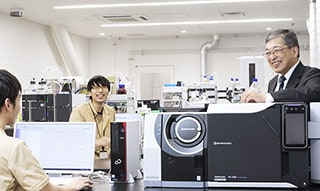 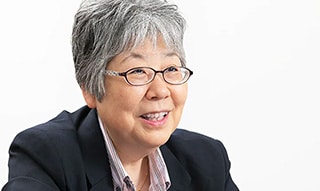 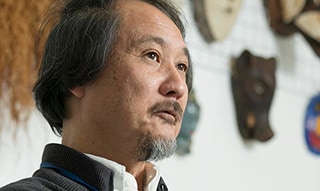