What Does It Take for the Team to Move into Europe?

When developing new businesses and markets, it often becomes necessary to tackle unknowns and respond quickly to unexpected situations. What is the difference between teams that are able to do this from the ones that can’t? This article introduces a story of Shimadzu’s Hydraulic Gear Pump team aiming to move into Europe in search of new markets.

“This is my machine.”
An Unexpected Obstacle Blocking Overseas Expansion

Hydraulic equipment is indispensable for such industrial and construction machinery as forklift trucks, tractors, crane trucks, dump body hoists, rice planters, and truck mount aerial work platforms. Energy generated by the flow of oil (hydraulic fluid) by the rotation of a gear gives a force to a part which becomes an "arm" of a machine, which thereby can be freely manipulated.

The massive power generated by hydraulic gear pumps supports modern industry and lifestyles. Shimadzu Corporation has been developing and manufacturing these products for roughly 100 years and boasts an overwhelming share of the Japanese market. About 80% of the gear pumps used in forklift trucks produced by Japanese manufacturers are Shimadzu products.

To expand its market share, the Fluidics Division, in charge of hydraulic equipment, attempted to enter the market outside of Japan around 2008. However, Shimadzu’s gear pumps were something of an unknown quantity to foreign manufacturers. In addition, gear pumps in Europe have different standards from those in Japan. The pressure is higher than in Japan, and the size of the hose for the hydraulic fluid is different, so the design had to be reviewed.

“It wasn’t too hard to clear the standards for pressure and size,” recalls Shinya Yamamura, then General Manager of the division. “But no matter how many times we tried, we kept getting outcompeted by local European manufacturers. The biggest reason was noise. So, around 2017, we changed our development approach to focus on reducing noise. Until then, we had designed products to meet our customers’ specifications. But this time, we decided to revise our design approach, and do whatever we wanted as long as we could make a product that could compete on noise. Essentially, we started engineering-driven development.” 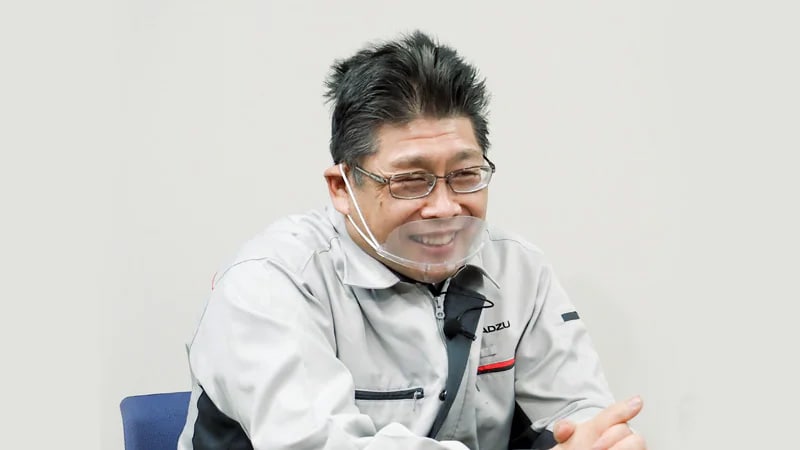 Part of the background to the demand for low noise in Europe is the difference in working conditions. In most European countries, forklift-truck operators are well-treated as professionals. “Operators really value their forklift trucks. They consider their forklift trucks to be their own machines,” says Yamamura. For this reason, their forklift trucks have stylish designs and many of them install cabins, which make noise more of an issue.

Originally, hydraulic equipment was powered by gasoline engines, but there has been a rapid transition to electric motors. This is another reason for the demand for quieter gear pumps. 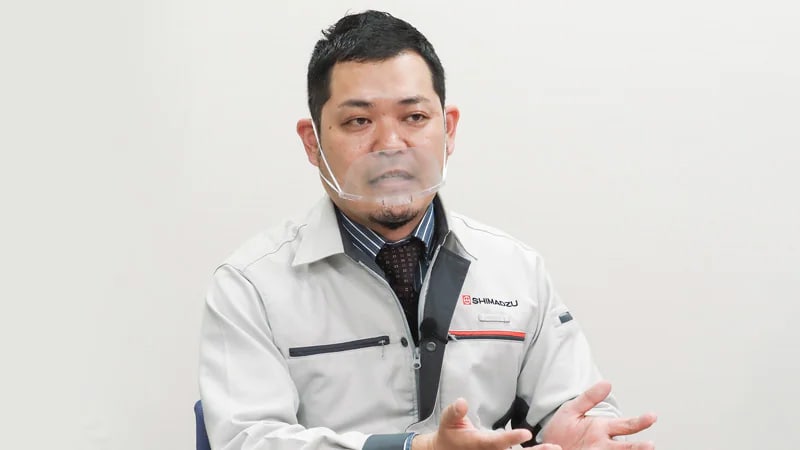 “Motors are quieter than engines, which causes the noise from the gear pump to stand out more. So, noise that was once drowned out by the sound of the engine was now being perceived as noise.” (Eijiro Tadokoro, Global Marketing Team, Sales Department)

Bringing a New Indicator to the Concept of Low Noise

“Our aim was to create a low-cost external gear pump with noise levels close to an internal one. In order to enter the European market, we had to clearly differentiate ourselves from local manufacturers.” (Tadokoro)

What should they do to provide new value to their customers? The development policy they arrived at after a market survey was a “redefinition of quietness.”

Ordinarily, the noise of a gear pump is evaluated by converting the vibration noise of a stand-alone pump into a sound pressure level, measured in decibels (dB). However, even a gear pump with an acceptable decibel value could not compete with others. 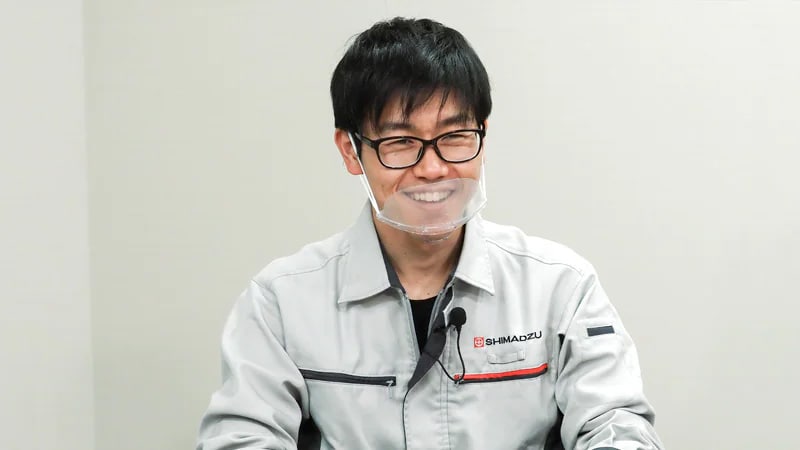 Noise evaluation has an indicator called “loudness,” which is an indicator of sound quality that takes into account the properties of the human ear, unlike decibel values that are simply a measure of physical vibration sound. The team’s basic strategy was to reduce the level of noise perceived by the operator by using this indicator to evaluate the noise generated by the entire vehicle.

The new development plan for gear pumps with a low-noise design was named the “Serenade Project.”

“Sales and upper management created a storyline for gaining market share, but we didn't know if we could accomplish that. But, Kokabu eagerly took on the task, and he was a great asset in the project.” 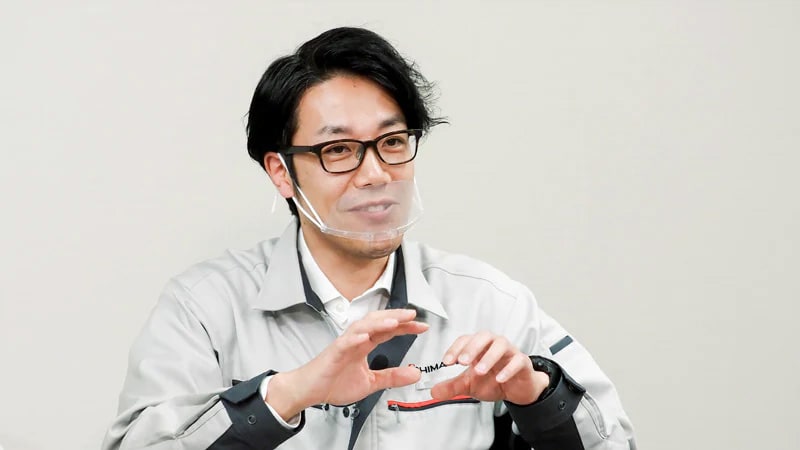 In collaboration with the quality assurance, manufacturing, and production engineering departments, the development group broke down the generated noise into its components, wrote down some 30 hypotheses of how the noise could be reduced, and tested them in experiments one by one. The factory’s collaboration enabled speedy development, creating one prototype after another, and successively mounting them on vehicles and measuring their sound. Kokabu listened to so many prototypes that, “After comparing noise over and over, after a while I couldn’t tell which was quieter anymore.” In addition, Kokabu showed a high level of activity, not only by conducting experiments, but also by visiting customers together with Tadokoro, engaged actively in discussions, and reflected the results back into development. This was a result of the Fluidics Systems Division’s strength. 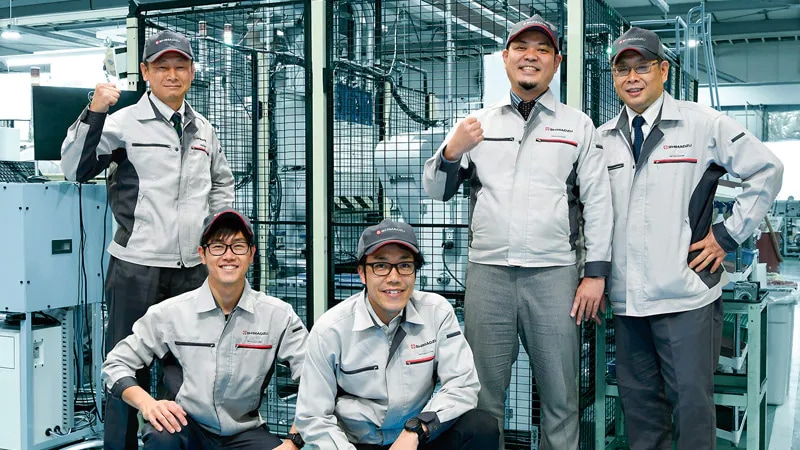 The slow but sure testing yielded results in March 2019, some two years after the project began. They got a big clue from the technology that Kanatani used to solve a customer issue. When Kokabu conducted an experiment using this technology, they finally saw a path to reducing noise to the required level.

“I spent two years focused on this work. But when I think back, it was a happy time. They let me do development however I wanted, and that’s all I thought about. It’s really fun when you can learn even one thing that you didn’t know before.” (Kokabu)

In April 2019, “the Serenade SRP300” series of gear pumps was exhibited at a construction machinery exhibition in Germany. The booth played a recording of a gear pump mounted on a forklift truck through a speaker as well as a video. A technology development engineer from a major local forklift-truck manufacturer praised the new gear pump, saying that it was certainly quieter. Shimadzu delivered a prototype in the fall of that year. Shimadzu brought sound recording equipment to the customer several times and held “listening sessions” of the vehicle’s sound. The company gave Shimadzu’s gear pump high marks for being quieter than competitors’ products and, in December 2020, an audit was carried out to make the final decision on its adoption. 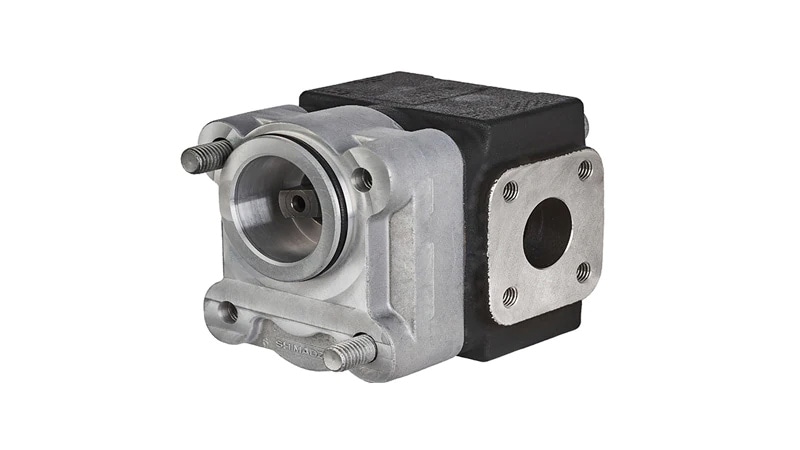 The gear pump with a low-design “Serenade SRP300”

Making the agreement required the customer to audit Shimadzu’s plant equipment and other facilities. Normally, a representative from the forklift-truck manufacturer would come to Japan and tour the plant. However, the COVID-19 pandemic was already in full swing worldwide. It was not feasible to travel abroad from Japan, or to travel to Japan from abroad. To overcome this difficulty, the team worked together to prepare a “remote audit.” 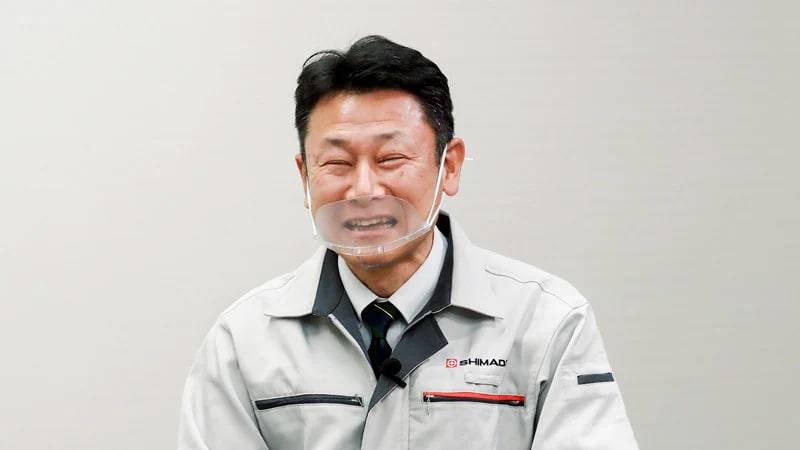 “Mr. Tadokoro came up with the idea and took the initiative in preparing for the remote audit. I was nervous on the day of the audit, but everybody worked together as a team and it went well. This spurred us to set up our remote infrastructure, and I feel like it shortened the distance between us and our customers around the world.” (Mitsuhiro Murata, Global Marketing Team, Sales Department)

After passing the audit, Shimadzu was notified in February 2021 that the Serenade SRP300 had been formally adopted, and the new gear pump finally entered mass production. But this was not the end of the team’s research and development.

“As we near 2030, the year set in the SDGs,” says Kokabu, “vehicle electrification will continue to progress. When that happens, we will need to develop technologies to make our gear pump quieter. We have finally entered the European market, and now our aim is to become the global market leader for gear pumps. The challenges we need to overcome in order to achieve this have become apparent, so we can’t rest on our laurels.” 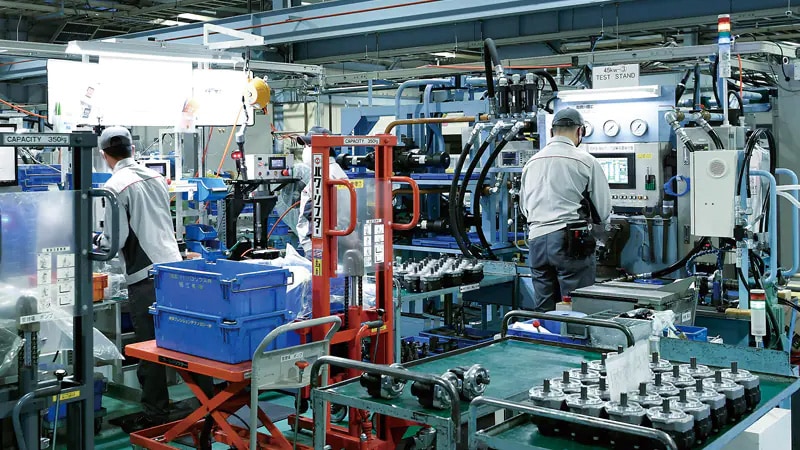 The Fluidics Systems Division is a small team of about 45 people in total, located at the Seta Works in Otsu City, Shiga Prefecture.

“We have engineering, quality assurance, manufacturing, production engineering, and sales all on one floor,” says Yamamura, “and the plant is nearby. Everyone is nearby, so we can go and talk with them any time. This lets us do development collaboratively. I think that this development was the result of the combined strength of every department in the Fluidics Systems Division.”

Even with their small team, they have established a culture in which people with differing roles collaborate with mutual trust, and junior employees can grow and demonstrate their abilities. The day seems to be not far off when the Division with this small team of excellence will expand their activities globally. 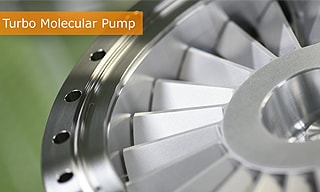 The Art of Generating Vacuums 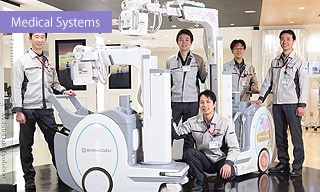 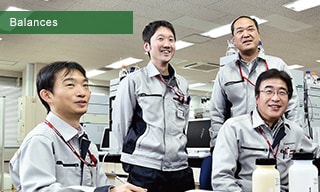