Recently, a wide range of multi-functional films have been developed which possess a variety of special characteristics designed to provide such functionality as enhanced protection and visibility in display screens for smartphones and LCD televisions. These multi-functional plastic films can also be designed to provide enhanced security, insulation, and light shielding for automotive and architectural glass products. This page introduces an example of the strength evaluation of self-repair coating film used on the functional protective film that covers the LCD screens of such products as smartphones and tablets. 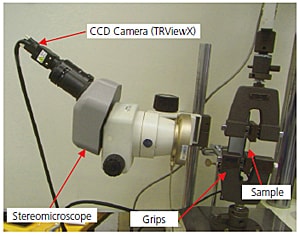 Next, using the TRViewX Point Pick feature, we quantified the test force loaded onto the sample and the amount of deformation that occurred at states (1), (2), and (3) of the self-repair coating film. Fig. 4 shows the Test Force -Stroke curve. 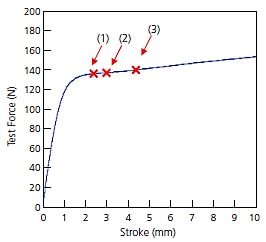 Fig. 4 reveals that the cracks occur in the self-repair coating film after the sample exhibits non-linear behavior - that is, when the plastic region has been reached. It is therefore presumed that the self-repair coating film possesses strength properties that prevent its damage in the elastic region. The cracks in the coating film appeared at about the 135 N load point, and after the cracks became clearly evident at a load point of about 137 N, the cracking suddenly became very pronounced over the range of 137 N-140 N.

In recent years, devices and components have become increasingly downsized and are being mounted at higher densities due to the trend towards thinner, lighter and smaller electronic devices equipment. Accompanying this, in the field of strength evaluation testing, there has been an increasing need for testing machines that can control and measure displacement and test forces on micro samples in the several µm or several mN micro regions and that can evaluate strength to high precision. The Shimadzu Micro Autograph MST-I has been developed and put onto the market in response to this need for a micro strength evaluation testing machine primarily in the electronic components sector.

Elongation and width are measured by video camera. JIS B7741 class 0.5 elongation, and JIS class 1 width can be measured in a non-contact manner to high precision. Tests using a thermostatic chamber also can be accommodated.